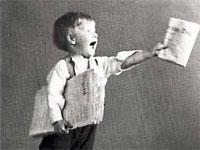 A roundup of interesting information

AMAZING PICTURES
If you like to see some amazing pictures, try logging on to www.ulo.ucl.ac.uk/, a web page provided by the UCL Astronomy Group. See some incredible space photos of what is happening in space now. Above is a recent image Announcing Comet Machholz.

GAMES AT E3 2000
There is not much time left, but the E3 (Electronic Entertainment Expo) will be held in Los Angeles between the 11th and 13th May. We would have told you this last month had we had a prior edition. E3 is the world's largest trade fair for new computer games, educational software and related products. You can expect to see all the biggest software developers there like Sony, Nintendo and Sega as well as hundreds of software houses.

The show is not about new processing programs or boring demonstrations about what the inside of a PC looks like, E3 is fun on legs. Almost every computer game that will be released on to the market over the next 18 months will be showcased in one way or another and the companies releasing them go to enormous lengths to make sure that their stands are the best. You can expect to see fireworks, martial arts displays , by ninja animals, loads of pretty girls dressed up like the game characters and more free trials than you can handle. The show is only open to Industry professionals and you need an authorisation to enter, this does not stop some 50,000 people visiting each year. You might like to have a look at the official site: www.e3expo.com

SEND A POSTCARD - IT'S FREE
The next time you are on holiday on the Costa, try sending your holiday cards via the Internet from a cyber café: www.postcards.org/postcards/ offer a free service. Birthdays, Wish you were here, Get Well and thousands of other different topics are available. I wonder how they do it?

THE TINY SOUTH PACIFIC ISLAND OF TUVALU
has become all the rage because of its top level Internat domain name, which is "tv". DotTV, an Internet start up in the U.S.A., has agreed to pay $50 million over the next 10 years for the use of the country code. Some people are bidding for as much as $1 million a year for DotTV domain names on their sites (and that was nice!).

INTERNET COMPANIES FLOATING ON THE STOCK MARKET
Everybody wants to make some quick money over the Internet and the way most entrepreneurs go about doing it is through, either floating their Internet company on the Stock Market or buying shares in an Internet company a few days before it floats. Recently there has been a run of small Internet companies becoming multi-million Dollar success stories overnight and individuals, take the Queen of England for example, have made tens of thousands of Dollars on a gambit of a few thousand Dollars.

However, what none of these investors seems to know is how these companies (with a few exceptions such as search engines and the largest of the e-commerce sites) can justify the millions of Dollars that they say their companies are worth when they float them. Advertising, databases, on line sales? Nobody is certain. A few weeks ago, one of the Internet's top developers commented on how unstable the Internet Market actually is causing stock in the majority of floated Internet companies to fall as much as 15%. If one man's opinion can affect the entire market, surely it gives some indication as to how investors are unsure of what they are doing and how much they are willing to gamble.

What is making thousands of investors flock to buy shares the moment they hear an Internet company is about to be floated? Some say it is because they know Internet is the way to go and that they expect the company to do well in the future. Others say that they responded to the "hype" about the company.

That is probably what many of these companies may be doing at the moment. With the help of national advertising campaigns as well as hints and tips to financial and community sites around the Internet, it is possible to create such a frenzy about a Site, that will have people jump to invest.

The thing to consider is that the Internet is still in its initial stages as more and more people log-on and, what companies can get away with now, may not be possible within six months. If you think that you can make some quick money out of the Internet and with a good tip off perhaps you can but take a good look at what you are buying into because it really is not anything more than graphics and code.

INTERNET ON THE BOX
Finally you can surf the net and, at the flick of a switch, watch TV. Currently there are hundreds of top companies battling it out to see who will develop the most efficient and cost effective "webbox". In the U.S. they have already taken the next step and Internet is available on the home TV screen, without the need of a PC. So far, the main users in Europe seem to be the larger hotels chains. Something else to do during the adverts! 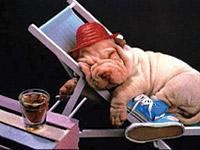 The EU requires passports for pets.
Pets can now travel between EU countries as long as they have their passport.
152.2 million Euros in Tourism Promotion