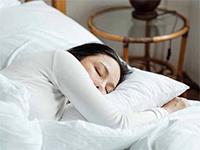 DEEP SLEEP CAN PROTECT FROM ALZHEIMER

Deep sleep is the phase in which it is most difficult for us to wake up, the activity of the brain remains low and cell regeneration occurs. Nothing to do with REM sleep, in which the brain is active dreaming. Without enough deep sleep we wake up tired and groggy.

A new study from the University of Berkeley published in the journal “Current Biology” has found that this phase of deep sleep can help reduce levels of the proteins
beta-amyloid and tau, two of the risk factors for Alzheimer's disease.

Poor quality of sleep has been known for decades to be linked to long-term problems with memory and cognition. During the experiment, the levels of beta-amyloid
accumulated during sleep were measured by 32 people out of 70 using a brain scanner.

The results show that people who slept less soundly had more beta-amyloid. Other studies have found that a lack of deep sleep is associated with higher levels of tau, another protein found in the neurons of people with Alzheimer's.

In 2019 it was discovered that during the night there is a greater transfer of brain fluid that coincides with the slow brain waves of deep sleep. Scientists propose that during deep sleep the brain "washes" itself, removing both beta-amyloid and tau.

This is very important for people with sleep apnea, in which the airway becomes blocked and leads them out of deep sleep. These people are at higher risk of dementia in old age.

Early checkups are important to prevent lung cancer
Pneumological diseases are highly prevalent and of great importance, unfortunately people are not aware of it.
It is said that vitamin D protects against Covid-19

Nearly there with the vaccine