A pick of useless but interesting newspaperĀ“s extracts and topics, some even curious.

London's murder rate has leapfrogged New York's. The murder rate in London overtook New York for the first time in modern history
last month as stabbings surged. During February, 15 people were murdered in the capital, compared to 14 in New York. The cities have almost exactly the same population. The Metropolitan police commissioner Cressida Dick has recently blamed social media for
escalating disputes into violence. Evening Standard

Luxury space hotel to open in 2021. A private firm has unveiled plans to open the first ever luxury space hotel in 2021, with the first guests staying the following year. Orion Span says six people, including two crew, will spend 12 days at a time in the hotel, which will orbit the Earth. Guests will be able to watch an average of 16 sunrises and sunsets every 24 hours and try out space experiments. National Geographic

The world's safest (and least safe) airlines. Last year was statistically the safest on record for air travel, according to the Aviation Safety Network (ASN). The ASN found there were 10 fatal commercial passenger and cargo air crashes which killed a total of 44 people, way down on the five-year average of 17 crashes with 495 deaths. Of the 409 airlines analysed the top twenty for safety included British Airways, with Qantas being the stand-out winner. Those rated one star (out of seven) for safety all hailed from either Afghanistan, Indonesia, Nepal or Suriname. The Independent

One muffin could exceed the daily sugar limit. Analysis by health groups has found some supermarket American muffins contain more than the recommended adult daily dose of sugar. The daily limit is seven teaspoons of sugar – and some of the cakes were found to contain as much as eight teaspoons. Among the most sugary were McDonalds, Pret A Manger and Tesco. Metro Milky Way ‘growing at 1,600ft per second. The Milky Way is expanding at 1,640ft per second, researchers say. A team from the Astrophysical
Institute of the Canaries in Tenerife calculated the rate of growth by observing similar galaxies using a range of telescopes on Earth. The galaxy, which contains our solar system, will eventually merge with Andromeda. BBC

Is the Queen of England related to the Prophet Muhammad? Historians are claiming the Queen is a descendant of the founder of Islam. After tracing her family tree back 43 generations, a Moroccan newspaper said Elizabeth II's bloodline runs through the Earl of Cambridge in the 14th century, across medieval Muslim Spain, to Fatima, the Prophet's daughter. A similar claim was made in 1986 by Burke's Peerage, a British authority on royal pedigrees. Daily Mail 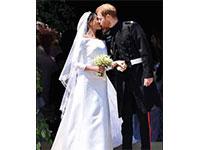 How much can a wedding cost? (to the tax payer)
It costs more than it should
Did you know that..?