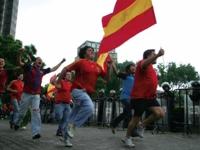 The Ugly Side of The Beautiful Game

The publicised racism that is surrounding the UEFA European Championship. (By the Count De La Perrelle)

The other day I was enjoying a cup of coffee with friends and inadvertently overheard a rather tasteless conversation from a group of people sitting at the next table to us. They were discussing the rather publicised racism that is surrounding the UEFA European Championship football that is so high profile in the news at the moment.

This tournament had been marred by racism even before it started. There have been violent incidents at recent club matches in the Ukraine and even in the host city Kharkiv. The media, I feel, have fuelled the fire as well by incessantly publicising the fact and sometimes taking more time to tell us about the negative aspects of the situation and missing the point that the vast majority of fans are not racist and just want to enjoy a great tournament and support their respective countries and teams.

All sorts of people and families are healthily passionate about football. Whilst football may not be my preferred choice of sport (I prefer Rugby) I do appreciate and enjoy watching a good game, especially when some excellent tactics and skill are involved.

The European football governing body UEFA has vowed to crack down on racism at the championships. It will be interesting to see just how they intend to go about this as players have continued to face abuses from racist fans. Dutch players have been subjected to monkey chants in an open training session in Krakow, Poland. Italy's forward Mario Balotelli, was reportedly the subject of racist abuse during his side`s 1-1 draw against the current European and World champions Spain. Czech full-back Theodor Gebre Selassie has claimed he had noticed some racist chanting aimed towards him during their 4-1 loss against Russia.

For goodness sake, is it not time we dropped these outdated attitudes and stopped acting like spoilt children and just grew up. Why do some people have such outdated beliefs or doctrines that they cannot understand the differences among the
various human races? We do not have the right to determine other peoples cultural or individual choices and we certainly do not have the right to think that ones own race is superior or has the right to rule others. I find it embarrassing that such a dreadful phenomenon has any place in football or anywhere else for that matter. Lets face it racism is not just a problem in football but of many societies and most of humanity.

What is wrong with these intolerant, prejudiced, people? Surely anyone with a modicum of intelligence would realise that racism is abhorrent at any time and especially in the 21st century. We are all in this world together and to insult a fellow
human being regarding their colour, race, creed or sexual orientation is an anathema to me. Also spoiling the enjoyment of the beautiful game by outdated and outmoded attitudes is a crime beyond my comprehension.

Like many others I suspect, I can remember years ago in the UK the problems we had with football hooligans. I can remember the Towns and Cities that I lived and worked in at the time, boarding up their shops and offices if there was to be a football match with the main team at the weekend. The many times we had the streets and shopping areas closed off on a Saturday afternoon and evening.

Then in the aftermath of the daytime fracas the evenings were then spoilt by groups of intoxicated thugs wandering the streets causing all sorts of commotion and inconvenience. Is it not time that we took a fresh look at ourselves and ask, whilst there is so much trouble and strife in the world right now and so many people are dying and suffering such horrendous abhorrent, appalling and atrocious situations, what race someone is should not be a problem to anyone.

The relationship between race and football has been known to take many forms. Fans have used the Saturday afternoon football matches to air their racial and other prejudices but it is now recognised that this minority of bigoted fans is only part of the problem. It is important that members of minority groups should also become involved in football as players, coaches or spectators and not feel in the least excluded. I hope that the various football Associations and Sport in general will sort out this problem once and for all. This will enable individuals and families who are passionate about football and sport to
enjoy the thrill and excitement of watching their team or sportsperson compete.

The UK was the first country to make a concerted effort to rid the game of racism, at least in its most obvious forms, with the founding of the Lets Kick Racism out of Football campaign in 1993, followed two years later by the launch of Show Racism the Red Card in the north-east of England, and the Football Unites, Racism Divides project in Sheffield. FURD is now centrally involved in international campaigns against racism in football, through the Football Against Racism in Europe (FARE) network. Let us all hope that their efforts pay off. 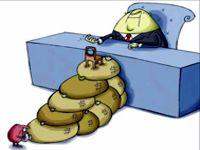 Little Hitlers
Are you a tyrant? By the Count De La Perrelle - Cognitive Business Therapist
When in Rome, do as the Romans do; when in Spain, try to do as the Spanish do.

How to deal with difficult Clients and negative attitudes in business