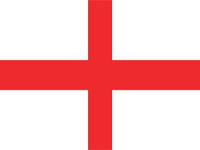 This month Robin Tilbrook, chairman of The English Democrats, writes exclusively for Web Express Guide on some important issues facing the people of England. 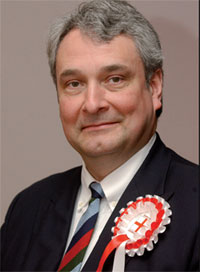 Let me introduce myself, I am Robin Tilbrook, the Chairman of the English Democrats Party, one of the newest political parties now emerging in England.

I realize many of you now living in Spain have probably despaired about the way things have been handled over the last few years, well you are not alone!  Thousands of us feel betrayed by Labour, misled by the Liberal Democrats and confused by the Conservatives, who have all provided very little in the way of good ideas and leadership over the last 10 years.

I must say that, from where I am, relaxing by the pool and enjoying good company in Spain seems infinitely preferable to leaving my legal practice and family life to try to defend what is left of our great country! But the encouraging thing is that England is awaking.

The English Democrats were launched in 2002 at the Imperial College London.  Many of the founding members were also members of the non-party political pressure group "Campaign for an English Parliament". It was increasingly obvious to the founding members of the EDP that the Westminster political establishment weren't going to listen to anyone unless they posed an electoral threat to their careers. This was as true of Labour as of the Conservative party, which had spent years denying that England is a nation, or that a national identity and a distinct culture actually exists.

For the Conservatives, the UK consists of Wales, Scotland and Britain - which is news to the 55 million English people who find themselves without any effective political representation! Many people have disengaged from politics in despair and, those not voting, form easily the largest party in elections now. Despite the odds, the English Democrats are one of the growing forces in the devolved UK, created to protect and enhance all things English.

Will there always be an England?  Don't bet on it. One of the sinister plans afoot from the Labour Government is to break England into 9 European Regions. This plan is not to give England a vote on devolution (they might not like the answer). What they are doing is creating 9 Regional assemblies, nine lots of bureaucracies, new flags, regional identities, nine different offices in Brussels and generally trying to break England into bits! They are already beavering away changing the structure of local County based police into "regional" police forces. They are removing local ambulance and fire brigades to the regions and have even set up regional assemblies, despite the fact they are unelected and have been rejected by the people in the North East in 2004 by 79%!

English Democrats believe that until the English have a parliament of their own within the UK the English nation is not represented. We consider it an outrage that Scotland and Wales have been given devolution but the English have not only been left out of any consultation on the issue, but now find themselves "sharing" the UK Parliament with MPs from Scotland and Wales who regularly vote on English only matters when English MPs are barred from voting on Scottish and Welsh matters. We are also furious that come this September, English university students will be the only ones having to pay £3,000 in top up fees, whilst the Scots and Welsh pay nothing - as their national executives rejected fees for their students, but used their votes in the UK Parliament to make the English pay!

England must have her own voice and the English Democrats are here, working on the ground to try and make sure our voice is heard. Scots appear to be dominating our political life, either as leaders of the main three parties, as funders of the main three parties and as senior figures in policy making. We are making great strides in reinvigorating Englishness, St. George's Day celebration, English culture and history; we need many of our country folk, especially those out in Spain who care about England to join with us.

England is a great country; she needs a political party to match her potential and ambitions.  We want to see a rejuvenated and liberated democratic England - and I invite our countrymen in Spain to join us in trying to ensure there will always be an England! 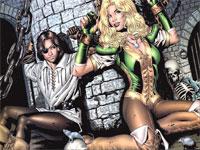 Eat your Porridge!
As if prison wasnt soul destroying enough; some poor criminals are made to share a cell with Marbella town council!
England expects