This years Grand National will take place on the 7th of April.

The first official races at Aintree were organized by the owner of Liverpools Waterloo Hotel, Mr. William Lynn. Lynn leased the land from lord Sefton, laid out a course, built a grandstand and staged the first flat fixture on July the 7th 1829.

On Tuesday February 26th 1839 Lottery became the first winner of the Grand National. In those days the field had to jump a stone wall (now the water jump) cross a stretch of ploughed land and finish over two hurdles.

The fastest time ever recorded by a National winner was by Mr. Frisk in 1990 with a time of eight minutes 47.8 seconds on firm ground carrying a weight of ten stone six.

He beat the previous record set by Red Rum in 1973 of nine minutes 1.9 seconds.

Every year millions of pounds are spent on wagers for the National and it has become the peoples race with some of the past runners and riders becoming the nations darlings. Whatever your feelings on horse racing there can be no denying that the National brings a lot of pleasure to a great many people and has been doing so since 1839.

In a world where many great sports of the past have been killed off because of the modern day fear of competitiveness, its nice to see at least one of the glories of the past still going strong, long may it continue. 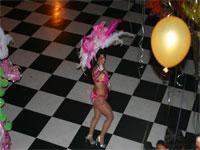