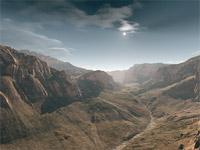 Spain gets 346 Billion cubic metres of rainfall each year; so where has it gone?

The Spanish government has recently unveiled a 16 million Euro plan which it says will help solve some of the countrys water shortages.
The plan involves pumping 1000 cubic Hectometers of water from the Ebro river basin, near the northern Basque region and diverting it to parched areas on the eastern Mediterranean coast.

One huge drain on water supplies on the Costa del Sol in particular are golf courses; the average golf course consumes the same amount of water in a year as a town of 15.000 people. Yet Spain gets 346 billion cubic metres of rain fall each year, of which 109 billion remains after evaporation; this should be enough to meet an annual demand of 35 billion cubic metres.

The diversion of the Ebro is an ineffective response to Spains cultural, social, political and economic problems. Opponents of the scheme say it even creates new difficulties; the defenders of the environment are especially worried that the Ebro delta, the countrys second biggest ecological reserve, might disappear.

Sediment in the river has dropped by 95% already and as a result the government has to spend somewhere in the region of 100 million Euros replacing sand to some of the Ebros banks. One thing is nevertheless certain; if desertification continues to advance in Spain, the country will at least save some of the budget put aside for sand! 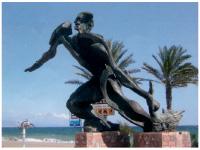 Is it art? + Everywhere & nowhere.
Another waste of money at the expense of taxpayers and car drivers. And a few words about magazine distribution on the Costa del Sol.
Never paint again!