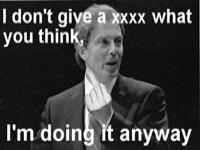 Bringing London to a standstill! Is Tony Blair stopping traffic for the wrong reasons?

The whole of Parliament Square is now sealed off for 15 to 20 minuets every Wednesday for PM Tony Blair to attend Commons for question time, raising the point is all this extra security surrounding the PM really necessary?

There can be no denying Tony Blair is a world leader, therefore open to terrorist threats. But on the other hand, should a major world city be brought to a standstill for one man? After the London bombings, Tony Blair trotted out all the old Churchill quotes about Londoners carrying on in the face of adversity, whilst at the same time spending millions turning Downing Street into a Fort Knox!

Well no Mr Blair! Londoners will not Ā“Keep smiling throughĀ”; they go to work because they have to. One way Tony Blair could regain a little of the peopleĀ’s respect is to openly walk the streets of London.

He tells us how the British people will not bow down to terrorism, but at the same time spends our millions to protect himself, it shows the breathtaking hypocrisy of the man. Why canĀ’t he travel on foot or public transport and lead by example. 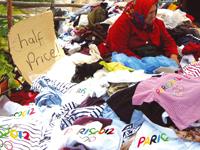 London 3 - Paris 2
The French should not be as sore about the Olympics as they make out they are.
What's New this month