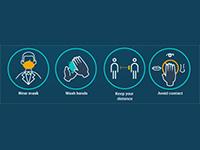 Could we get rid of coronavirus without a vaccine?

If you could see it, it would be easy

Unfortunately it is invisible to the naked  eye, it knows no national boundaries nor any colour differences and it spreads like wildfire from one person to many.

The logical solution is to find a vaccine as  soon as possible in order for some of us to get some protection. I say some protectionbecause as we have seen with the flu  vaccine it may not be 100% effective.

I believe there is another way. It has been established for a fact that soap and water is the most effective way to destroy the virus. Hands and surfaces can also be  disinfected instantly with the use of alcohol based products, bleach, oxygenated water and other domestic cleansing fluids.

We have also established that the virus is passed on from one person to another via droplets of saliva emitted into the air while we speak or breathe, also such particles an float and be carried by the wind for a distance before they land on some surface where they remain active for some hours.

The virus is caught by breathing in these particles or touching infected areas and then touching one’s face, mouth or eyes. Knowing this should be enough to eliminate  the pest all together but it does require the cooperation of every single person. By maintaining a safe distance between people, by wearing masks to stop the droplets landing anywhere, by washing hands with soap and cleaning surfaces as we go along, this is how the virus becomes visible in the infected people and in isolating for 14 days those who are infected, cure or die, eventually the virus is eradicated once and for all. It really does not take long to achieve this if only everyone cooperated.

The greatest example of this working has been provided by the New Zealand PM100% of the people for 4 continuous weeks of isolation, New Zealand is now free of the virus for as long as no carriers are allowed in from the outside.

I fail to understand the irresponsible people who ignore these facts and defy the best advice that is given by science. This is why is becomes essential to enforce these requirements, if only some politicians would consider first the health of the their nation instead of their own.

A word of caution!
For residents and visitors of the Costa del Sol alike.
FAECAL TESTING FOR THE DETECTION OF COLORECTAL CANCER