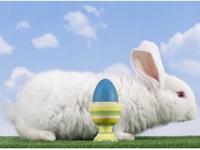 What has all this got to do with Easter?

The English word Easter, though it has come to designate a Christian holiday, actually takes its name from the pagan festival of Eostre, goddess of spring, and has roots deep in Anglo-Saxon mythology. Easter is also timed to coincide with the Jewish feast of Passover. It comes like a breath of spring, marking the return of the planting and lambing seasons.

For the Christian world, Easter is the commemoration of Jesus resurrection, observed on the first Sunday after the full moon following the spring equinox, which can fall anywhere between March 22 and April 25 and, this year, Easter Sunday is on the 23rd March. But for those who love food, it is also a holiday associated with chocolate, painted eggs and big family meals. It is customary early on Easter morning for children to get up and search the house for eggs and other treats left by the Easter bunny the eggs and the rabbit both are ancient symbols of fertility and springtime rebirth.

An egg's shape is fascinating. The tradition of decorated eggs goes back to the furthest reaches of history, because since time immemorial the egg's shape has symbolized fertility, life and renewal. In the Middle Ages great egg processions were held, occasions to celebrate the season of renewal and rebirth as nature awoke from her long sleep.

It was not until the 18th century, in France, that someone came up with the idea to empty out a fresh eggshell and fill it with chocolate. Then came moulds, decorations and many delicious traditions. In France, when children hear the bells on Easter morning they set out into the yard to hunt for Easter eggs or for chocolate chickens hiding in the shrubbery! Here it's the bells that bring sweets to good children, hidden under their wide iron or bronze skirts, as they ring out their pride at having been blessed in Rome on this holy day. However they are not the only emissaries: in the Tyrol it's a chicken, in Switzerland a cuckoo, and in Anglo-Saxon countries, a rabbit.

I cant see the local supermarket accepting payment in eggs of any kind, as here in Spain the chocolate egg does not seem to be part of the Eater tradition and can only be purchased from specialized foreign managed shops. 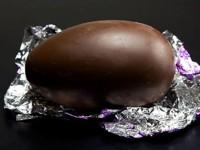 Hand Made Chocolate Easter Eggs & Bunnies
An ideal gift that can even be personalised with a short message!
Safe Food at Christmas