WHY THERE ARE SNOWSTORMS AMID GLOBAL WARMING

At the beginning of January the Spaniards were impressed by the great amount of snow that was falling in part of the Iberian Peninsula due to the storm âFilomenaâ- This is all part of the extreme meteorological phenomena brought about by global warming. 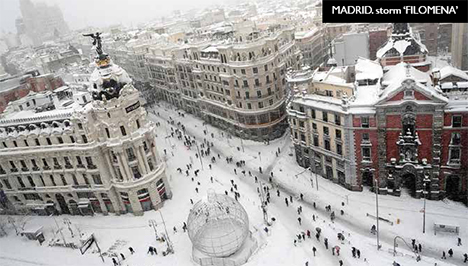 Like every time it snows, some opportunistic person seizes the opportunity to make jokes saying that with the cold it is, it is not possible that the planet is warming. Climate change deniers tend to confuse weather with weather. When it rains in deserts, it is usually in the form of large storms that cause flooding. If you are in the  desert on the day it rains, you might think that the weather is rainy, when in fact it is extremely dry.

Other effects of climate change are the so-called extreme weather events. The planet is warming and we have already exceeded the historical average prior to the  industrial revolution by one degree. However, this increase in temperatures makes extreme weather events more frequent and violent.

69% of extreme weather events are caused by climate change Heat fires in Alaska and Australia, increasingly frequent and devastating hurricanes in the Caribbean,  floods in France or heat waves in  China - these are all extreme events. In a Carbon Brief report that gathers data from 300 attribution studies, it was found that 69% of extreme weather events have humaninduced global warming as a  common cause.

It is true that the most common extreme  vents caused by climate change are droughts and heat events, which account for half of the cases. However, extreme cold and snowfall, although less frequent, can also be produced with greater virulence due to climate change. The first mechanism by which climate change could have affected the storm is quite basic: warming temperatures leads to evaporation of water, leading to a more humid atmosphere, leading to more precipitation.

More rainfall means greater chances of flooding, ut also of snowfall, when temperatures are low enough and humid air collides with a cold air mass. This is precisely  what has happened with the storm Filomena that swept Spain in January. A water-laden Atlantic storm has encountered a stream of cold air from the North Pole,  eaving snowfalls and low temperatures that had not  been recorded for half a century. It is still not known with total certainty to what extent global warming has determined this specific storm, for this an attribution study is necessary once it has passed.

Scientists have long warned that climate change will bring more frequent, wetter, and slower-moving storms. If the next storm shows us anything, it’s that climate  change doesn’t just mean more drought and more hurricanes.

Why is it that some people do not pay their bills?

Which is the deadliest animal on the planet?