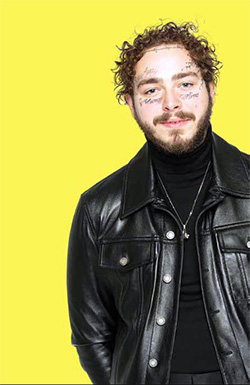 Austin Richard Post (born July 4, 1995), known professionally as Post Malone, is an American rapper, singer, songwriter, and record producer. He is known for his introspective songwriting and laconic vocal style, Post has gained acclaim for bending a range of genres including hip hop, pop, country, and rock. He first attained recognition in 2015 following the release of his debut single "White Iverson". He subsequently signed a recording contract with Republic Records.

According to Post, he chose "Post Malone" as his stage name when he was 14 or 15. The name was rumored to be a reference to the professional basketball player Karl Malone, but Post later explained that "Post" is his last name, and he used a "rap name generator" to get "Malone". At 16, using Audacity, Post created his first mixtape, Young and After Them Riches. He showed it to some of his classmates at Grapevine High School. He was voted "Most Likely to Become Famous" by his classmates as a senior in high school. He worked at a Chicken Express as a teenager.

After hitting one million views within a month of releasing "White Iverson", Post quickly garnered attention from record labels. In August 2015, he signed a recording contract with Republic Records. Post subsequently worked with a number of prominent rappers such as 50 Cent, Young Thug, and Kanye West, among others. In August 2015, he performed at Kylie Jenner's 18th birthday party, where he met Kanye West, who enjoyed his music, leading to him collaborating with Post on his single "Fade" from his album The Life of Pablo. Post later began his friendship with Canadian singer and songwriter Justin Bieber, which led to Post being an opening act for Bieber's Purpose World Tour.