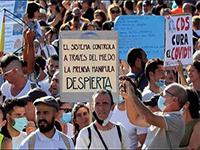 Why do so many rebel against the use of masks and other measures to prevent the spread of COVID-19?

According to the DSM-V, the manual of psychological disorders, people who present these personality traits do not distinguish between good and evil, they do not feel as much empathy or have remorse, they do not hesitate, sometimes they use lies or deception, they are insensitive, cynical, and disrespectful to others, they are  arrogant, consider themselves superior, and are generally more prone to breaking rules. Doesn’t this remind us of anybody we know?

That said, it is not surprising that new research in Brazil has found that people who do not care about compliance with measures to prevent the spread of COVID-19  tend to show higher levels of traits associated with antisocial personality disorder or sociopathy. The study has been published in the journal Personality and Individual
Differences.

According to the study authors, “compliance with containment measures varies enormously between people.” According to  heir conclusions, “this is related, at least partially, to psychological factors such as personality traits.”

In the study carried out through the Internet, 1,578 Brazilian adults were interviewed who completed a battery of tests to measure maladaptive personality traits, as  well as evaluations of empathy and compliance with COVID-19 prevention measures. Those who scored higher on the measures of callousness, deception, hostility, impulsiveness, manipulation, and risk-taking tended to lessen the standards of social distancing, frequent hand washing, and wearing a mask in public.

As the researchers clarify, “the lowest levels of empathy and the highest levels of insensitivity and risky behaviour are directly associated with non-compliance with  prevention measures. These features explain, at leastpartially, the reason why people continue not to adhere to preventive measures, even with the increasing number  of cases and deaths. Exposing oneself and others to risks, even when they can be avoided, is a typical trait of people with antisocial tendencies and low levels of empathy.

This study agrees with and reinforces the findings of a similar study conducted in the United States that associated “dark” personality traits with failure to adhere to prevention standards designed to stop the spread of COVID-19.

REFERENCES
Compliance with containment measures to the COVID-19 pandemic over time: Do antisocial traits matter?

Smartphones Dumb You Down