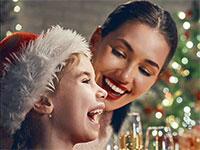 Unfortunately there is so much trouble everywhere else that staying in Spain and celebrating the festivities right here in Spain is probably the best bet, however much the airlines are reducing their prices. 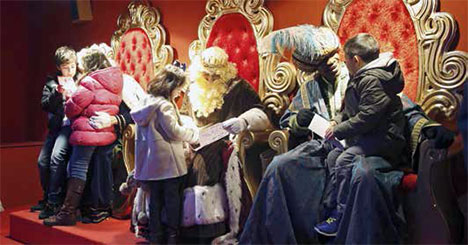 Although the 25th is more of a family and religious celebration, the Spanish traditionally celebrate their “gift giving” on the 6th of January, when, according to belief, the Three Kings arrived at the grotto, following the Star.

New Year is another story when traditionally the first minute of the New Year is welcomed with the eating of 12 grapes, one for each stroke of the clock from midnight.
Christmas in Spain can be quite a treat because nowadays Xmas is also celebrated on the 25th and the feast does not end until the 6th January. The giant multi-billion
euro lottery, splendid nativity scenes, lots of great food and loads of good food and meals certainly make their mark during this season.

Some may say that you need snow at Christmas, although the Costa is mild by comparison, it can get quite cold and you do not have far to go inland to find the snow
with the result that different traditions have developed in different parts of Spain.

For instance, December 21st, the shortest day of the year, is celebrated in Granada and nearby Jaen by jumping through bonfires for the fiesta de Las Hogueras. We are taught that children shouldn’t play with fire, however in these parts it is said to keep illness away.

On December 22nd, El Gordo, the massive Spanish lottery, is drawn, everybody plays it and they start selling it in August!

Christmas Eve is the most important part of Christmas in Spain and the dinner that day is the biggest meal of the year, but there is nothing as ubiquitous as turkey.  Most bars will be closed on Christmas day and there won’t be many restaurants open. It is when families unite as a follow on of the 24th.

The only rule is that people eat well. Lobster is very common, and a roast of some sort is essential, usually lamb or suckling pig. In addition to all this, most families will also have fish soup and an abundance of other seafood, cheeses, hams and pates. Dinner starts late, at about 10pm and will go on for a couple of hours.

Proceedings are interrupted at midnight by the chimes of the local church, calling worshipers to the misa del gallo’ (Mass of the Rooster), so called because it is said that a rooster crowded on the night Jesus was born.

The most relevant ‘misa del gallo’ takes place at the Benedictine monastery at Montserrat near Barcelona.

Although some exchange of gifts is done on Christmas Eve, children will often get a little something, but they really have to wait until January. Couples will normally spend Christmas Eve with one set of parents and Christmas Day with the other. By the evening of the 25th, most shops and bars are open again and these days more and more youths have started going out on the town.

Did you know that you can celebrate New Year as many as six times in Spain?

Whatever you do, don’t forget your grapes... good luck!

CORINNE LEWIN
A devoted Rotarian's wedding in Monaco performed by George Massan, the Mayor of Monaco himself
Smartphones Dumb You Down