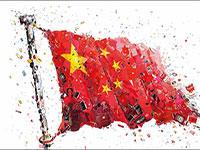 They say that money is the root of all evil, yet greed is a bigger culprit and the wise “Confucius” must have known this right from the start, when China was still considered a poor communist country.

Attracted by the cheap production costs and all type of slave labour, we have been tempted to start the import of toys and clothing since the end of the WWII to such an extent that import quotas and tariffs had to be introduced, that however did not stop the Chinese looking for countries free of such quotas so as continue with their selling endeavours.

For instance the “1975 Treaty of Lomé Convention” signed between the European Economic Community (EEC) and 71 African, Caribbean, and Pacific (ACP) countries, permits goods to be imported into Europe from Mauritius and other locations as if they were part of Europe. As a result Chinese factories started to spring up, as they did in Mauritius, using the local cheap labour, but what I do not know is how much of the material used came/comes from China anyway.

Then of course western companies started taking a more active part in the manufacturing of all different products in China with the pure and simple object of reducing manufacturing costs and make larger profits. This of course meant, and still does, giving the Chinese our knowledge for free. In my opinion the biggest sinners are the producers of high fashion labels who are the less justified to do so when already charging inexcusable high prices.

If we take mobile phones as an example of what greed can do and how far it can go, the world's first mobile phone call was made by Motorola on April 3, 1973, yet now the largest and most popular producers are now all based in the Far East, while some of the European use parts that are produced in the Far East. What happened to “Silicone Valley”?

The point I am making is that in one way or another we have been giving our money to China for years just to buy cheaper, even if cheaper means less quality and often even dangerous as in electric goods and foodstuff, while allowing our own factories to close down and create more unemployment, worst of all, giving away our knowledge.

It is of little surprise that now of course they have the money to buy us out, again appealing to our greed for money and the weakness created in our industries! 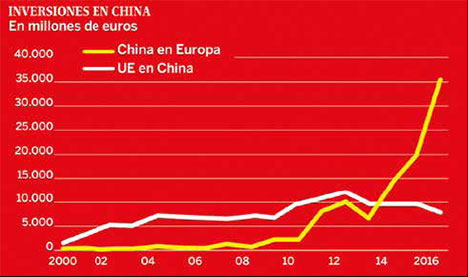 For more than a decade, China has been scouring the world from Asia to Africa, the U.S. and Latin America with a seemingly bottomless wallet in hand. Clearly China has asserted itself as an emerging world power, now also expanding its footprint in Europe.

Thanks to the U.K. with its pathetic idea of a Brexit, a breakup of Europe would suit China (as well as the USA and Russia). To divide and conquer is an old tactic that makes life a lot easier for the conqueror.

According to Bloomberg, China has bought or invested in assets in Europe amounting to at least $318 billion over the past 10 years. The largest purchase in the UK was for a small stake in Rio Tinto PLC by Aluminium Corp of China for $14.1 billion in 2008, in Germany Midea Group Co. took over KUKA AG, manufacturers of industrial
machinery for $4 billion. Even Pirelli in Italy was taken over for $7.1 billions.

The volume and nature of some of these investments, ranging from critical infrastructure in eastern and southern Europe to high-tech companies in the west, have raised a red flag at the European Union level. Leaders who include German Chancellor Angela Merkel and French President Emmanuel Macron are pressing for a common strategy to handle China’s relentless advance into Europe, and still with some opposition from the EU’s periphery (personal greed again).

It’s vital to understand how such activity fits into China’s foreign policy aims. More than 670 Chinese or qualifying Hong Kongbased entities have invested in Europe since 2008 of which almost 100 are state-backed companies or investment funds, which collectively had a hand in transactions worth at least $162 billion, or 63 percent of the total reported deal value (as compiled by Bloomberg).

A review mechanism to regulate Chinese investment has been put into action in the U.S. and Australia. This is why Europe is now the number one destination for Chinese investment and it is high time that we start doing the same before we lose too all our key industries. 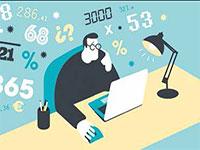 NEW YEAR NEW CHANGES FOR THE SELF EMPLOYED
Social Security
What is new for the 2018 income declaration?

What happens if you cannot manage to pay your quarterly VAT bill?