The food reviews are not advertisements. We pay for the meal and we comment and give points as honestly as we can for the benefit of readers. The points relate to quality and price according to the standard of the restaurant.  We try to avoid bad reports so we visit only restaurants which we believe are worth reporting on.

Introduction
Gauchos in Gibraltar have been open for one year. Having heard of its popularity we decided we must discover the reason for its success. It is very easy to find, almost next to the arches that connect to Casemates Square, right in the centre, which means that it is easily accessible on foot from the bust stop as well as the car parks.

The Staff
We had booked and as soon as we walked in, we were warmly welcomed with a big smile by Antonio, the head waiter. He and everyone else was dressed “Gaucho” style with a colourful sash tied round the waist. Once we were shown to our table, a pretty young waitress came round to ask us if we wished to have a drink while inspecting the menu and picking those delicious olives she had placed on the table. Throughout the meal we were very courteously and attentively attended to by all the staff, who just could not do enough to help us enjoy the meal.

Atmosphere
It was fairly early when we arrived at the restaurant, so there were not many diners there, but as the evening went on, the place seemed to fill up quite rapidly, even though Antonio told us that Thursday is not a busy night. The decor is rustic and it gives the feeling one is entering a cave or a large wine cellar, which matches the Gaucho theme rather well. The premises are rather large and one has the choice of sitting near the big charcoal grill and see what the cook does, or select a more tucked away corner, opposite the bar. It does not take long to feel at home and unfold a rather pleasant evening.

The Menus
The menu offers a very good and varied selection to please all tastes, to include fish and vegetarian dishes, although one must bear in mind that the main theme is beef, which, we are assured, is original and imported from Argentina. The menu describes the type of beef and how it is imported and prepared.

Wine List
A fairly extensive selection of wines, which does include re and white house wine by the bottle or glass. The wines are mostly of Spanish origin but they range from the most popular to the more exclusive Riberas del Duero. For those who prefer bubbly, than naturally Bollinger, Perrier and Taittinger are a good choice followed by a cava.

Empanada de Pollo
This is two pastries filled with diced chicken tomato, onion and olives, presented on a clean white plate accompanied by some decorative tomato, some red lettuce and an orange slice. FBA – They were served quite hot and they looked rather inviting. I have not before eaten anything similar to compare the taste with. Quite a new experience but a very pleasant one, it’s a traditional type of Argentinean dish and well worth trying.
Team score – 9/10

Empanada de queso Azul
As this is a traditional dish with different fillings, I chose this one to try the difference; it was presented exactly as the chicken filled pastries. As a matter of fact I thought the portions were generous in both cases. FBA – The cheese just oozed out of the pastry as I sliced into it, no mistake there, it was definitely blue cheese which slowly solidified as it cooled down. A really nice combination with the pastry.
Team score –9/10

Chuletón
I have not often seen a steak that size. Some 700 grams of charcoal grilled steak and rib the size of a serving dish, I thought it was for two, there was no room for anything else on the plate. FBA – It pleased the eye and it most certainly pleased the palate. It was so tender it literally melted in the mouth. It was cooked as I asked and the taste was rich and moist, not dry as some charcoal food can be. The “chimichurri” sauce was available on the table as well as different types of mustard. I don’t know how long I can go without trying it again!
Team Score – 10/10

T. Bone
It is described as cut high with the fillet in place to give a blend of two different cuts and textures, but I shall start with the size, it was as large as the chuleton and I definitely though it was pretty good value for money.  FBA – Again it was done exactly as asked for and it was extremely tender and tasty. I particularly noticed the tenderness and moistness of the meat resulting in a taste that only real beef eaters can appreciate.  Thoroughly recommended.
Team Score – 10/10

Greens
Any vegetables have to be ordered separately. We selected a Pampas salad with lots of fresh sliced tomatoes covered in plenty of garlic over an assortment of red and green lettuces. We also wanted to try the sliced potatoes, baked with tomatoes, cheese and a little garlic. Both were excellent, but bear in mind that each was enough for two or even more persons.

Crepes
Here I wanted to try a bit of a mix. I ordered the pancakes with the “dulce the leche” (traditional Argentinean sweet). The folded pancakes were served with a dish of dulce de leche and some whipped cream. FBA – Well, what can I say? Delicious and certainly worth trying, but does not help figure, so watch it!
Team Score – 8/10

Mixed Ice
If you have a sweet tooth, you’ll find that this is most gratifying, there is so much whipped cream and ice cream that it might be good for two. FBA – The whipped cream and the ice-cream and the chocolate chips added for good measure made a terrific final dish to complete this superb meal.
Team Score – 9/10

Summary
A very nice restaurant that well deserves the good reputation it is making for itself. All members of staff are welcoming and pleasant, the food is excellent, there is wine to please all tastes and the atmosphere is pleasant and welcoming. I thought it would have been much more expensive therefore I certainly think it is good value for money and well worth crossing the border for a really super Argentinean charcoal super-steak.

Just ate there last week. Had the chuleton -- and it was huge. I asked for medium rare (pink) and it was a bit over cooked. If you are American with American tastes for how beef is cooked, remember that these folks are British in habits and overcook their meat. Order it rare. It was delicious beef (would that we had some nicely aged Argentine beef in the US -- but the US beef producers have fought any importation tooth and nail). My wife had the salmon and said it was cooked perfectly -- done but still moist and tender. The sides are excellent. 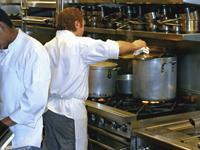