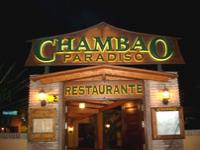 Chambao Paradiso, - Estepona - Opening Hours: Every Day from 13:00 to Midnight

The food reviews are not advertisements. We visit a different restaurant every month, we pay for the meal and we comment and give points as honestly as we can for the benefit of our readers. The points given bearing in mind the price level. We make a point to visit only restaurants which we believe are worth reporting on.

Introduction
Driving back and forth on the N340, this new restaurant cannot be missed and I have been meaning to try it for some time. Apparently Chambao means hut in Brazilian and it is made up of one main part with 4 different satellites each offering a different eating area with its own characteristic. Though it was raining, I could see that a well kept garden offered and additional open air eating area for the summer, which I thought would be very pleasant.

The staff
The first impression is always given by the staff as you walk in and in this case I immediately thought: that the manager was professional, welcoming and extremely polite┬ö. Once shown to a table of our liking and made comfortable, we were soon given the menus and asked if we wanted a drink. I found the service fairly fast, most polite and very professional at all times.

Atmosphere
As I walked in through the door, the first thing that caught my eye was the plentiful and well organised display of tapas of all kinds, just on the left. Apart from making my mouth water in anticipation, it made think of quality food. The food on display, the well stocked bar area, the teak tables and the rest of the matching furniture and furnishing, including the way the table were prepared and set at a respectable distance from each other, made me think of quality and a high level of customer care. I liked it.

The Menu
There were two. One comprised an infinity of tapas available as portions, half portions or just tapas, it also comprised the chef┬Æs recommended choices. The other was a menu a la carte offering a fairly comprehensive selection of starters, salads, pastas, rices, soups, meats, fish and desserts. I would define the style as Spanish ha├╗te cuisine. Not easy to make one┬Æs mind up and it took us a while to decide.

Wine List
Not the typical run of the mill wines that everyone knows by name or sight, what they offer is a fair selection of the better more refined quality Spanish wines, although of course it does comprise the well known Rioja.

Starters
As we sat at the table waiting for the meal, we were pleasantly surprised with a small appetiser, some small crispy spring rolls.

Almejas Gallega a la rote├▒a
A well presented serving plate of clams in tomato sauce. FBA ┬¢ It smelt absolutely delicious and the taste was even better. The tomato sauce was rich with a back taste that must have come from the French beans mixed with it.  I cannot quite remember where I had tasted that sauce before but I am certain it was an Italian dish. I had to ask for some bread to dip in that delicious and plentiful sauce, which blended rather well with the clams.
Team score ┬¢ 9/10

Trio de Tapas ┬ōPutamadre┬ö
A Spanish expression, meaning that something is very, very good. A combination of three different starters: Salmon, duck and beef delicately served on the same plate. FBA ┬¢ I rather liked the smoked salmon, prepared with some blue cheese, which was an unusual but pleasant blend. The other two morsels were more subtle in taste, particularly the duck  It is also one of the chef┬Æs recommended plates.
Team score ┬¢ 10/10

Solomillo de Buey a la parilla.
Grilled sirloin fillet steak served with some carrots, broccoli, cauliflower, green beans, and potatoes lo pobres. FBA ┬¢ I asked for the fillet to be medium done and that is exactly what I got. Well done on the outside and just moist on the outside. Very tender and very nice indeed. The vegetables were also nice, fresh and crispy. I did not even have to ask for the mustard which was placed on the table at the same as the steak. Thoroughly recommended.
Team Score ┬¢ 10/10

Medallones de solomillo iberico.
Pork fillet medallions stuffed with liver and garnished with Malaga wine sauce.  FBA ┬¢ Lovingly presented on a square dish and accompanied by the same vegetables as above. A rather delicate dish blending with just the right type of sauce which reminded me a little of the pepper sauce usually served with steaks, yet I could see no trace of pepper. Very nice indeed, well worth trying.
Team Score ┬¢ 9/10

Crepe with chocolate Mouse & vanilla ice-cream.
Now this was something! Chocolate mousse wrapped in a crepe and served with vanilla ice-cream and some cream. FBA ┬¢ Not what you would have when dieting, but certainly tempting enough to take off a diet. There is only one way to describe it. Delicious!
Team Score ┬¢ 10/10

Cheese Cake
This was served with some ice-cream and or cream. We had both. FBA ┬¢ Apparently they call it the New York style cheese cake and it was served warm. I thought it was very nice though not the typical cheese cake I am used to.
Team Score ┬¢ 8/10

At this point we were offered some Chupitos on the house and they too were unusual. A liqueur topped with whipped cream. Unusual but rather pleasant.

Summary
I rather liked the place. I thought it was of high standards and certainly not expensive for the type of food and service that they provide. One can actually choose to sit at the restaurant part and select from the menu a la carte or just sit at the tapas part of the restaurant and gorge on a vast variety of delicious tapas, many of which are even displayed. I certainly was pleasantly surprised to find that the cost of the menu a la carte for two was a lot less than what I expected. It would have been even less had we opted for a selection of tapas. 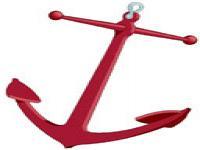 The WXPG food review - Barlovento Torreguadiaro (Sotogrande)
Barlovento Restaurant ┬¢ Sotogrande Opening Hours: Every day from 1 pm to 4.30 pm and from 7 pm to 11.30 pm.
A review of the restaurants reviews