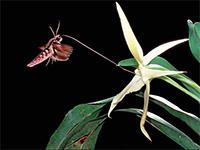 By Manuel Lucas Garcia Curator of the Orchidarium in Estepona

For this reason, on the 30th January 1862, Darwin wrote to the then Director of Kew Gardens, Sir Joseph Dalton Hooker, informing him that he had received a case full of orchids forwarded by his colleague James Bateman and that amongst them there was a specimen of Angraecum Sesquipedale in flower, saying he was amazed by its  very long nectar tube, located at the rear of the floral structure and containg the nectar right at the bottom of it.

It was the first time that a nectarium 30 cm long was ever discovered. “What kind of proboscis should the butterfly need to reach the nectar?” He said in his letter, insinuating that the plant had  created a flower with a nectarium 30 cm in length because there had to be a butterfly with a proboscis that long. Such a butterfly was totally unknown and the simple idea that it had a proboscis 30 cm long resulted in laughter on the part of the scientists of the time.(*)“Mr Darwin is doddering, inventing impossible butterflies!”

Yet  time proved him right: fifty years later the pollinator of Angraecum Sesquipedale was discovered, a specie native of Madagascar. A small night butterfly with a proboscis 30 cm in length, the very butterfly of which Darwin had predicted the existence decades earlier simply by observing the flower. They named it Xantophan Morganii  Praedicta, as predicted by the brilliant naturalist.

The flowering of the specimen that we preserve at the Estepona Orchidarium has coincided with this special day and it ived up to the description: 17cm of wingspan and a nectarium 30 cm long.

(*): “What a proboscis the moth that sucks it, must have! It is a very pretty case” the original text used in the letter 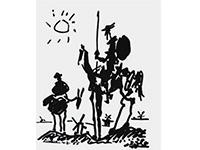