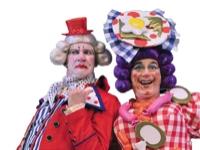 The History
The origins of British Pantomime or Ā“PantoĀ” as it is known in the UK, probably date back to the middle ages. The idea of pantomime originated
in ancient Greece, and later rose to popularity during the reign of Augustus in ancient Rome and blends the traditions of the Italian Ā“Commedia
dellĀ’ Arte, and the British Music hall to produce the art form that is Pantomime. Ā“Commedia dellĀ’ Arte was a type of travelling street entertainment which came from Italy in the 16th century.

The Plot
The plot is very simple: The girl dressed as a boy who is the son of a man dressed as a woman, will win the other girl (surprisingly dressed as a girl), with the assistance of a person(s) dressed in an animal skin. Try explaining that to an American a German or someone from the Far East !!

The Goodies and Baddies
Good enters from stage right and Evil from stage left. This tradition of Evil entering from the sinister side goes back to the mystery plays and the few working star traps [through which the demon used to be projected in a puff of smoke] can always be found in the down stage left position. This tradition seems to echo medieval times, when the entrances to heaven and hell were placed on these sides. Tradition also dictates that the villain should be the first to enter, followed by his adversary the good fairy. The object of the exercise is that the principal baddie has to make all the innocent characters lives a misery from the beginning, but by the end of the show all the baddies and their henchmen will have either been destroyed, or be made to see they error of their ways and turn into reformed characters.

Principle Boy
The other element of Ā“TraditionalĀ” pantomime is the Ā“Principal boyĀ” role [played by a female] although the role is that of a boy hero. The female playing the principal boy usually dresses in short, tight fitting skirts [the shorter and tighter the better] accompanied by knee-high leather boots and fishnet stockings. This provided a marvellous opportunity in ages past when female attire went all the way down to the ankles, to display a shapely pair of limbs and to increase the male audience.

Principle Girl
Nearly always played by the prettiest female in the cast, traditionally portrayed as the epitome of youth and innocence. She will usually be called upon to sing a solo. And always ends up Ā“living happily ever afterĀ” with the Principal Boy.

The Dame
The principal boy part was one well-established theatrical convention an even older one was that of men playing female roles. After women moved onto the stage at the time of the Restoration, a tradition still remained of men playing some comic female roles. A million miles away from the drag act, the Dame is a study in female eccentricity. The DameĀ’s entrances are also more extravagant and exaggerated than any other character. Always played by a male member of the cast, dressed in drag; this character is usually portrayed as oldish, unattractive and fairly common, all qualities which she believes she is the exact opposite of! She befriends the two principals and quite often ends up Ā“living happily ever afterĀ” either with the Principal GirlĀ’s kindly old widowed Father/Uncle/Guardian or with the ultimatelyreformed Principal Baddie. The Dame is also known for wearing outrageous costumes, and these are often be used to good comic effect, by parodying the fashions of the day. The Panto Dame is expected to exude warmth and comedy, even pathos.

Ugly Sisters
Unlike the dame, the Ugly Sisters always have to tread a thin line between comic characters and out and out villains. The ugly sisters are of course an intrinsic part of the Cinderella story. But versions of them can be found woven into in other pantomimes. The first portrayal of the ugly sisters was done by women, but they were soon superseded by men.

And like the Dame, this has become a tradition that never changes. The element of song and dance in Pantomime is extremely important. And Pantomime wouldnĀ’t be the same without its chorus of singers and dancers, and troupes of juveniles.

Now traditionally performed at Christmas for family audiences. British pantomime is now a popular form of theatre with song, dance, comedy, slapstick, audience participation and mild sexual innuendo. The plots are often loosely based on traditional childrenĀ’s stories we all know and love.
Hopefully the tradition will carry on for years to come but the genre is in danger from the modern threat of political correctness with some theatres thinking that men dressed as women is demeaning. 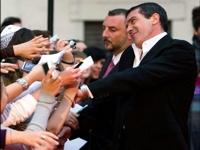