Name this person and win a free meal for TWO valued at Â€25.00 in total with a bottle of house wine at FlahertyÂ’s Irish Restaurant at the Puerto Deportivo de Sotogrande. Send your entry by Fax 952 893 146 or e-mail to editor@webexpressguide.com by 15th June. The first correct answer to be drawn will be the winner. Please supply name, phone number and area where you live.

In 1905 I started a brief career as a CafÃ© singer in Paris, became the mistress of a wealthy military officer and then of an English industrialist. With their help I was able to open a millinery shop, and the two men also helped me by introducing customers from society with the result that my simple hats became very popular.

Eventually I became one of the premier fashion designers in Paris to include themes such as simple suits and dresses, womenÂ’s trousers, costume jewellery, perfume and textiles.

The most complete answer: Charlie Chan 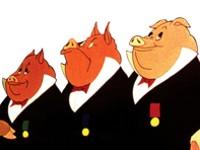 Outbreak of "Swine Fever" in the House of Commons
Â“More reported cases of swine fever, about 87Â” state the Prickly Pair.
THE QUIZ Â–Who am I?