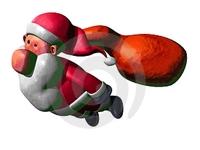 Written by Mr Glynn Robinson, who is now the Physics teacher at Mayfair Academy.

No known species of reindeer can fly. BUT, there are over 300,000 species of living organisms yet to be classified and, whilst these are mostly insects and germs, this does not completely rule out flying reindeer which only Santa has seen.

There are two billion children (under 16) in the world but, since there is no requirement for him to visit some religions, his workload, according to the Population Reference Bureau is reduced to around 378 million. This represents a census average rate of 3.5 children per household. Presuming there is at least one good child in each home, this means he has to visit 91.8 million homes.

Thanks to the time zones and rotation of the Earth, along with the presumption he will travel from East to West, Santa has 31 hours of Christmas to work with. This equates to about 822.6 visits per second.

This means for every Christian household with good children, Santa has 1/1000th of a second to park, hop out of the sleigh, gather the presents, jump down the chimney, fill the stockings, distribute the remaining presents under the tree, eat whatever goodies have been left, get back up the chimney, get back into the sleigh and move on to the next house.

Assuming the 98.1 million stops are evenly distributed around the earth  which is false but we will, in this instance accept, we are now talking about 0.78 miles per household, a total of 75.5 million miles, not counting rest stops for relief which, on average, should be at least every 12 hours, plus feeding and watering the reindeer, etc.

Santas sleigh must be moving at 650 miles per second. This is 3,000 times faster than the speed of sound.  For purposes of comparison, one of the fastest man-made vehicles on earth, the Ulysees Space Probe, moves at a paltry 27.4 miles per second.  A conventional reindeer runs at about a maximum of 15 miles per hour.

The payload of the sleigh represents another interesting element. Assuming that each child gets nothing more than a medium sized lego set (about 2lbs in weight), the sleigh is carrying about 321,300 tons, not including Santa who is invariably described as overweight.

On land, a conventional reindeer can pull no more than 300lbs. Even allowing for flying reindeer being able to pull TEN times the normal amount, the job is not possible with only eight reindeer.  We need some 214,200 of them. This increases the payload, not counting the sleigh, to 353,430 tons which will be traveling a 650 miles per second. This creates an enormous air resistance, thus the reindeer will experience heat in the same fashion as a spacecraft re-entering the Earths atmosphere.

The lead pair of reindeer will not just have red noses, they will absorb 14.3 quintillion joules of energy per second each.  In brief they will be subject to spontaneous combustion and expose the reindeer behind to the same degree of heat energy.  The whole process will also create deafening sonic booms in their wake. The entire reindeer team will be vaporized within 4.26 thousandth of a second.  Santa meanwhile will be subjected to centrifugal forces 17,500.06 times greater than gravity.  An 18 stone Santa would be pinned to the back of the sleigh by 4,315,015 pounds of force.

In conclusion, if one Santa ever did deliver presents on Christmas Eve, hes dead now.

So, for all of this to happen, there must be a large number of Santas  so keep on believing! 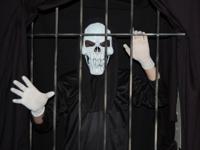 Horror at Mayfair Academy
The shadows were lengthening and a full moon was rising as the band of weird creatures formed a straggly line outside the huge oak doors...
Avoid SADS and be safe!