Drink it before it becomes famous! Steve Bannell recommends

What happens if you take a winemaker from Bordeaux and put him in the Ribera del Duero, one of Spain¬ís top red wine regions? The answer is Montecastro 2003, a superb red wine that has been given 90 points by Spain¬ís top wine critic, Jos√© Pe√Īin.

The Ribera del Duero wine region has been making the famous Vega Sicilia wines since the 19th century although it was only as recently as 1982 that it became a DO (a Denominacion de Origen or quality wine area). The area is situated in northern central Spain along the Duero valley mainly to the west of Aranda del Duero. Contrary to appearances it is high country (700-800 metres) and because of this the climate can sometimes be problematic. However, in the right conditions Ribera del Duero can make red wines as good as any in the world. The secret lies in the altitude where a noticeable difference between day and night temperatures produces grapes with tastes and aromas that are very concentrated. And good wine can only come from good grapes.

The main grape variety is called locally Tinto Fino or Tinto del Pais but it is better known to the rest of us as Tempranillo. Confusingly, the Tempranillo grape also has a number of different names in other wine regions such as Cencibel in La Mancha and Toro in Toro! Tempranillo gets its name from the Spanish word ¬Ďtemprano¬í meaning ¬Ďearly¬í because it ripens early. It is, therefore, ideally suited to an area such as Ribera del Duero which has a short growing season. Because of their concentration of flavours, wines from the region are especially suited to aging in oak barrels.

In 1982 only a few bodegas existed in Ribera del Duero but their numbers have increased rapidly over the years as the winemaking potential of the area has been realised. With the area seemingly approaching saturation point it is a pleasant surprise to find that Bodegas Montecastro, started in 2001, can produce wine of such high quality. Could it be the influence of winemaker, Jean-Fran√ßios H√©brard?
Jean-Fran√ßois¬í pedigree is impressive. He is a native of St. √Čmilion and his father was responsible for many years for the world famous Bordeaux wine Cheval Blanc.

Before taking charge at Montecastro, Jean-Fran√ßois worked in Do Toro making the highly regarded Quinta Quietud. As a winemaker his focus is on quality at every stage of the process; selection of diverse vineyards, small vineyard yield, careful harvesting, a special fermentation process and careful aging in oak for 17 months. Finally the wine is released onto the market only when it is ready. With such attention to detail the wine can only get better and better.

Montecasto 2003 has a deep cherry colour, wonderfully fruity aromas, is full-bodied in the mouth, well-balanced and long. All in all it is an elegant and sophisticated wine by itself or the perfect partner for roast lamb. 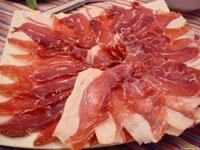 Jamon Serrano
Spanish hams are air cured and curing can take between 8 months and 3 years.
History in a glass - Baltasar Gracian Vi√Īas Viejas