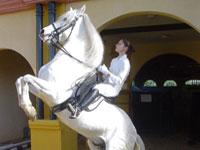 The Jerez annual horse fair, between the 1st and 8th of May, is an absolute must for horse lovers, however it is also an event of international interest.

It was on the 9th of October 1264 that King Alfonso X, after conquering Jerez de la Frontera, declared that there should be held two duty-free fairs in the town, one in April and the other September each year.

In those days, the fair was more of a market trading in various goods like crockery, haberdashery, etc. and at one point, in later years, it even became a cattle market. The horse fair of today was really started in 1955 by Don Alvaro Domecq & Diez when they launched the First Horse Week of Jerez, the home of the Pura Raza EspaûÝola.

Of course times change and things evolve, however the essence and the festive character of the fair have been maintained unchanged.

The party goes on all day and night everywhere at the Real (fairground), on the avenues and in the casetas (fair booths). During the whole week, guitars, wine, dancing and singing play an all important role for those who come to the fair and the Gonzalez Hontoria Park turns into a huge party; a place where everybody is invited.

The city and its people are the best hosts you will ever find. 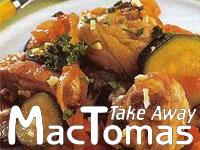 MacTomas, your take away cook
Last year we introduced our readers to a takeaway with a difference. Practically a year later, we have paid MacTomas another visit.
Calvente Supermercados

The American Dream in your Kitchen.