Gordon says that this is the perfect time of year to visit Seville.

Expo Centre is an awe inspiring site built on the very spot from where Christopher Columbus began his epic voyage to the New World. ¬ďExpo 92¬Ē contributed substantially to bring tens of thousands of visitors to Seville and its location still is the city¬ís show case.

Visiting Seville last May for the ¬ďFiesta de la Piragua¬Ē, the annual Kayaks race held on the river Guadalquivir in the city centre, I was astounded at the effort made to keep everything in such pristine order.

It was a warm morning and, in keeping with Spanish tradition, the start was a little later then advertised, but it all seemed well organized and spectators had a good view of the races.

After the event, I ventured under the rather hot sun to discover a little more about Seville and I could not help noticing the ¬ďlook alike¬Ē open top London buses.

¬ďCan I help you Sir?¬Ē said a uniformed man standing at one of the bus stops. I hadn¬ít been called that in a long time.

He then explained, in perfect English, that for a rather small charge, I could travel on the buses for 24 hours, spread over two days, free to alight at and explore any sights of interest and that the buses arrived every 20 minutes.

Apparently the cost includes travel on the city¬ís ¬ďClassic¬Ē tramway with a guide on board to explain the historical sights.

I opted for the open top bus, I selected English language on the earphones provided to enable me to hear the commentary on the various points of interest that we were about to visit.

It is interesting to note that a special night excursion is available, at no extra cost, to admire Seville¬ís wonderful night illuminations. The buses and trams run 365 days a year and visit 80 of the main points of interest.

As the bus moved off, an attractive voice in the headphones clearly welcomed us to the ¬ĎRed Bus¬í and talked about the many buildings we were about to see.

The first point of interest was the impressive ¬ďPlaza de Espa√Īa¬Ē. You are invited to leave the bus to explore this magnificent square and take photos of the fountain, canals and a stately building with all of its colourful Andalucian tiles.

Visiting the parks and palaces that were built for the World Trade Fair in 1929 is a remarkable reminder of the past. The architecture is almost beyond belief and, I must say, these were to me the highlight of the tour.
The next stage took us around the ancient walls of the city, passing the restored railway station (worth a visit), and crossing the river by one of the new bridges that were built for the 1992 Expo Centre.

The ¬ď Isla Magica¬Ē(a mini Disneyworld) was the next stop and the final stop was the ¬ďMonasterio de Cartuja¬Ē, where Columbus stayed before his voyage. It now houses a museum of events during the five hundred years since the time of Columbus¬ís departure (1492).

Another popular way to see Seville is on one of the modern boats that ply the deep Guadalquiver River at regular intervals. Boats leave from the ¬ďTorre de Oro¬Ē, close to the Bullring. Alternatively, an intimate journey on a horse drawn carriage through the street of Seville, can out do all other methods.

Accommodation is plentiful but can be a problem at certain times of the year when special events take place, so you are advised to book in advance. We would like to recommend the ***Hotel Dona Carmela. If you wish to live like a king, then try the Alphonso XIII. Once a Royal Place, it is rated as one of the ¬ĎHundred Best Hotels in The World¬í booklet.

A visit at this time of the year should be high on your list for a memorable visit to ¬ĎChanging Seville¬í. The magnificent avenues, gardens, flowers and trees and shrubs will shortly be approaching their very best and remember that April sees the start of Spain¬ís largest and most spectacular ¬ĎFeria¬í around the 12th of April.
We loved it! We are sure you will too! 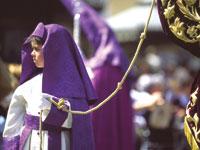 Buena Pascua!
Of all of the Catholic traditions which are celebrated in Spain throughout the year, none is more important than Easter Week, Semana Santa (Holy Week).
A weekend away in the cave village

Discover the real joy of cruising