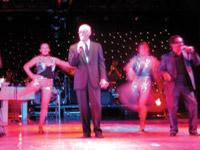 The Rat Pack is back!

No we are not kidding. Paul Ellis (Frank Sinatra), Lee Dean (Dean Martin) and Steve Shapelle (Sammy Davis Jr.) make a perfect impersonation of these three very famous performers and you can see them every Monday at the Sala Fortuna, in the Casino Torreque

As you may know, The Rat Pack Show was a success in Las Vegas and also in London's West End.
If you want to see three of the great 20th century entertainers at work together, this is your chance.
Essentially it recreates one night at the Sands Night Club at Vegas in 1960. Everything hangs round that and the show owes much to the skills of those who present the famous three, so cleverly combining appearances and voices.
The songs remain as good as the day they were born, collectively Mr Bojangles, New York, New York, The Lady is a Tramp, Mack the Knife, That's Amore, and Sway, to name but a few, all capable of rekindling the memories.
It is not nostalgic; it is really a very entertaining and fun evening. As you arrive you are immediately welcomed by the staff and shown to your table and the complimentary bottle of Cava for every 4 persons (does that remind you of The Talk of the Town?).

Don't forget to tell the staff if it happens to be your birthday, you will probably end up on stage with Sammy Davis Jr. and the rest of the gang. And if you feel strong about it, you might even show Frank how to "do it your way".
At one point, much to the surprise of all, the stage and some of the tables on the same platform, start revolving.
At the end of the show, practically everyone gets to meet Frank, Dino and Sammy as they come down the stage, shake your hands, talk to you and even pose in photos with you.
At this point you'd think it is all over, but as you start trying to remember where you parked your car, the stage drops down to floor level and its function change to become a dance floor.
"Who said we are going home? And, there is even a casino after that!"
It is a night to remember and an opportunity not to miss. Thoroughly recommended book now, the last show of this season will be on the 27th December. (see details on back cover).

Left or Right handed?
Not having played golf for several weeks, I do not have any recent reports to submit. Do I hear someone saying: "Thank God"?
ALL ENTERTAINMENT articles