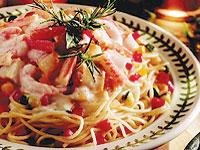 The difference between Italian and Andalusian cooking is quite notable.

Although the Mediterranean basin is surrounded by different countries sharing very similar natural products, there are some very basic differences that characterize each country and each region. It follows that although there may be some similarities beween Andalucian cuisine and Italian cuisine, the differences are very notable.
Most Italians eat a simple breakfast consisting of coffee or a cappuccino and a pastry, but the main meal is, if possible, at 1:00, and there is a light supper at about 8:00.
Culinarily, Italy is an incredibly diverse country -- dishes, ingredients, cooking times, and spicing change radically from one region to the next. However, the basic philosophy of the meal, seen as an occasion for friends or family to gather around the table and share a relaxed interval before leaping back into the fray (during the work week) remains constant.
A weekday lunch will begin with a primo, or first course, a deep-dish plate of soup, risotto, or pasta of one sort or another. The serving size is about a cup, or perhaps slightly more, and is not intended to be a full meal.
The primo will be followed by a secondo, a fish, meat, egg or vegetable-based main course with a side dish chosen to complement it (for example, scottiglia, a hearty Tuscan stew, might be accompanied by boiled spinach squeezed dry and sautĂ©ed with olive oil and garlic). Again, portions are small -- about a quarter pound of the second course, plus a serving of the side dish, and bread. Lunch will usually close with fresh fruit, and a demitasse of espresso.

Taken as a whole, the meal is extremely balanced: carbohydrates from the first course and the bread, proteins from the first and second courses, vitamins and minerals from the vegetables and the fruit. A festive meal such as a Sunday family get-together will be a bit more elaborate: There will likely be one or more antipasti (appetizers), and there will be, in addition to fruit, cheese and some sort of dessert, either a pudding, pastries, or a store-bought cake. In all cases there will also be wine. Indeed, a Piemontese dinner with its rich cheese-based appetizers and hearty braised meats would be but a shadow of itself without a glass of Barolo or Barbaresco, while the fritto misto (mixed fried meats and vegetables) that's such a nice second course on a summer day would seem hopelessly cumbersome were there not a zesty Chianti Classico d'Annata to clear the palate between bites. In a festive meal there may be several wines, chosen to complement their courses, and there will likely be a bottle of sweet sparkling wine with the dessert. On festive dinners there may be several first courses, for example a risotto, a pasta dish, and ravioli, but their total volume will still be about a cup. By the way, this is called an assaggio di primi, a sampling of firsts. The organization of an Italian dinner? It can follow the same pattern as lunch, or be much lighter, for example a bowl of soup or some fruit. Assuming you don't decide to go for pizza.
Try some of the recipes at www.italianchef.com 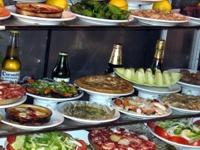 Tapas
A spanish Tradition. Tapas an assortment of dishes as appetisers, entrees or even a cheap meal
Why go to Marbella?