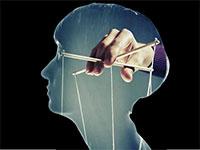 DO NOT GET BRAINWASHED!

CAN WE STOP THE CRIMINAL ABUSE OF PEOPLEÂ’S MINDS?

Ever since Homo Sapiens, us, humans have looked for reasons, explanations for our existence. Why do we die? What is our purpose for being here? Surely there must be something else!

To me this translates into a sense of insecurity and even a feeling of lack of purpose, a purpose and a reason that require an answer. I regret to say that this is also a weakness, something that some people exploit to the detriment of others either for personal gain or personal ambition or satisfaction, or even self-inflicted personal
belief.

“Mystic Meg”, the witch doctor, and even the priest have always provided some form of emotional security and emotional satisfaction by contacting spirits, and providing answers for our existence and even continued existence after death.

There is a fine line between providing some answers to help someone come to terms with his or her life and using one’s power for psychological and emotional abuse. Religion is probably the oldest and most effective brainwashing tool ever devised. It serves the purpose of discouraging bad and encouraging good.

Personally, yes I do believe in a Creator, but I have enough sense to know right from wrong doing, I do not need religion to tell me the difference or to scare me into being good. As a matter of fact there have been more wrongs done in the name of one religion and another and more killings than for any other reason.

Unfortunately today the internet has provided one of the most powerful tools available to the abuser who can have access to large numbers of persons, many in real need of help, and even turning creating and propagating old conspiracy theories that are believed by those that get “sucked-in”.

Consider anti-vaccine conspiracy theories proposing that vaccines are harmful and that the harms are covered up by pharmaceutical companies and governments.

Despite the Earth’s spherical nature having been known since at least the time of Pythagoras, in recent years, American software consultant Mark Sargent through the use of YouTube videos has convinced a large group of people into believing that the Earth is flat.

These are just single examples of a multitude of conspiracies and false beliefs that have been rooted into large number of people via the internet and especially YouTube.

Whether the Earth is flat or not, whether the Illuminati control the world’s finances, whether reptilian people live amongst us, per se, is of little consequence, but there is strong evidence that some people adopt conspiracy theories more than others and that belief in conspiracy theories seems particularly strong among people with unsatisfied psychological needs who are taken advantage of by the abusers, with greater effect via YouTube.  To my mind this is grossly criminal, especially when brainwashing tactics are used.

Yes, it does not seem possible, but in reality such methods are being used. As a matter of fact, all you have to do is lo took for brainwashing in YouTube, and you will come across loads of videos instructing stepby-step on how to practise brainwashing, even to the point of hypnotism of the victim.

Psychological abuse is equivalent to psychological violence, emotional abuse, or mental abuse, characterized by a person subjecting, or exposing, another person to behaviour that may result in psychological trauma, including anxiety, chronic depression, or post-traumatic stress disorder.

Abusers have learned to abuse in order to get what they want including, often, money. The abuse may be physical, sexual, emotional, psychological and even financial. Abuse is an intentional act that one person uses to control another.

The result can be devastating on the abused, resulting in anxiety, chronic depression, paranoia, suicide, schizophrenia or posttraumatic stress disorders, to name a few.

Camouflaging under “preaching one’s belief and freedom of speech”, unfortunately the rogues who twist people’s minds for their own gain or satisfaction seem to escape the present preventive measures.

It would seem that most of the problem originates from the United States, although it seems it is fast catching on elsewhere. I do not know what the answer is and how the evil aspect of this can be discouraged.

Would it make sense to introduce some sort of an official licensing permission to be granted, subject to vetting and approval of use? Should we have a special Internet Police body to catch them out?

One thing seems certain, the problem is growing.

TOMOSYNTHESIS, the mammography of the future.