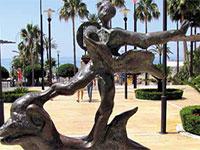 Can you call it art?

There can be no denying that in the past Spain was way out in front in the highly diverse and slightly bizarre world of creative art; you only have to recall such names as Dali, Picasso and Gaudi to name but a few. And although the majority of those gentlemen were as mad as March Hares, they were, and indeed still are, seen as innovative and indeed they did have something to say individualistically.

But art is a breeding ground for the more unconventional members of society or indeed the odd black-guard, with an eye to praying on the susceptibility of modern art collectors.

But perhaps I shouldn’t be too hard on today’s “artists”, after all, there are many other forms of daylight robbery out there and at least the paying of thousands of euros for a piece of bamboozling bronze, does put a smile on the faces of the gullible halfwits enticed into parting with good money for it.

So, why is the Costa del Sol blessed with so many of these monuments to the outstanding skill of salesmanship? There can really only be two answers to that question; either someone holding the council purse has no idea of what is art and what is unnecessary ironmongery or said person is related to the “artist”.

Marbella alone has more chunks of bronze scattered around its roundabouts then an overweight Colossus of Rhodes and I am no authority on the cost of giant paperweights, but I wouldn’t mind guessing that they don’t come cheap.

By trying to keep up with its illustrious artistic past, Spain has wandered slightly off course; the days of Dali and his cronies are long gone and in a cynical world, there really is nothing new under the sun. Sticking a head on backwards or an ear in the middle of a forehead has not only been done before, but it didn’t really work then, so why should it work any better now? “Artists” are notorious for waving their hands around and flouncing into a girlie tantrum if  challenged on their work, but to the less easily impressed this is just an act of subterfuge and a way of covering up the fact that they quite often pull off a coup and pocket vast sums of money for something that any ten-year-old  could turn out in metal work class.

Claiming to be on a higher plain then the rest of us mere mortals cuts no ice, especially when you happen to be sitting in a Maserati, on your way to pick up another fat cheque from the council. I wouldn’t advocate that all statues should have the classical perfection of Michelangelo’s David and indeed there is a place for more thought provoking and unconventional art, but the next time an article appears in a magazine interviewing the “artist” at the unveiling of his latest “piece” wouldn’t it be refreshing, if, instead of waxing lyrical, the “artist” would punch the air and shout out “suckers!” to the gathered council dignitary’s; because after all, that’s what they are. 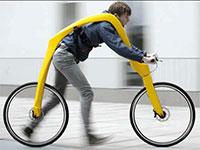 Summer is approaching, how is your figure?

Has anyone found himself yet?