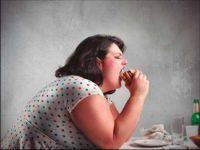 Summer is approaching, how is your figure?

Is obesity your problem? Ask the Prickly Pair.

Thankfully God blessed me with a super figure with curves in the right places and all that, but don’t hate me, I have had my weight problems like everyone else, well may be not as some of you who are obese, inactive, overindulging and generally life threateningly fat. Obesity is quite a large subject, it may even take more than one edition to cover it. On the other hand, one doesn’t really want to be too skinny. You need to find a balance between size ‘0’ and a ‘whopper’, which, according to Burger King, means a lump of meat.

I think models have naturally arrived at size ‘0’ through evolution in order to scale down their B.M.I. (Body Mass Index) to match the amount of their brain cells they actually use. As a matter of fact, underweight models have been banned by Spain. Well, what do you expect with the strong similarity in pronunciation between ‘Guapa’ and ‘Whopper’ and a Mediterranean diet, it is not easy to find many underweight Spaniards.

As a matter of fact, I do believe that such models have been banned by all countries with a Mediterranean diet. So much for that myth!

As I said before, just because I have been blessed with a virtually perfect figure, it does not mean to say that I have not found myself having to shift that dreaded couple, of
pounds. I can tell you I have found myself still sitting up at 3.30 in the morning, taking out yet another cigarette, not bothering to turn on the lights or the telly, gulping down
another glass of water. My hands shaking and the stomach feeling as empty as if my organs had been removed, even my hearing became supersensitive hearing every snoring
breath and fart, not just from my partner, but the next door’s neighbours too. I even felt light headed (shame it wasn’t 20 kgs lighter).

And that was just with only a couple of pounds to shift! I did not bother weighing myself or joining a slimming club or gym; nobody binges in those places and I don’t like anyone telling me what I can or can’t eat. Anyway, I can’t see another dozen fat women from the slimming club coming round at 3.30 in the morning to give me moral support.

Here is a tip. Before starting I wrote down a list of can eats and can’t eats. It was not difficult. The dos was grilled, boiled, greens, fruit, some pasta soups, etc and lots of water.
The don’ts was everything I live on; you know, bread, butter, choc, crisps, nuts, and so on.

You see? I know all about slimming. I think that all fat people do. Don’t bother to go the doctor to have your thyroid gland checked; you already know why you are fat:- you can’t stop pigging out.

After making the list, it will become obvious why you are fat. Most of your usual food will be in the right-hand column, on the “don’t eat” list. It is not the thyroid problem, nor the slow metabolism, not the huge bones or water retention. It is your mouth all along; you just can’t stop putting fattening stuff in it. The problem is not so much eating what you can’t eat but knowing when to stop.

So, remember, ladies, try not to become obsessed while you are dieting, and avoid thinking about food twenty-four hours a day. On the other hand, maybe that is where you’re going wrong; if you spend more time thinking about food and less time doing it, you wouldn’t be so fat in the first place. 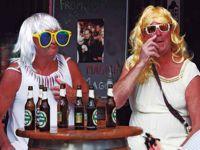 Has anyone found himself yet?
Please do not contact the Prickly Pair direct but any hate-mail will be kindly received and passed on.
Sucked, tucked & plucked!

Buying & Running an English Bar on the Costa