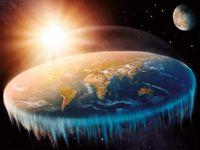 Some people make others believe that our planet is flat.

One thing that I have noticed lately is that some people say they believe the Earth is flat, stating that the Global Earth is nothing more than a deception created by
governments to hide a greater scheme that will unfold in time.

So much for all those that were burnt at the stake for saying that the Earth was round and for Christopher Columbus who risked all including his life to prove that the Earth is Round, followed by Amerigo Vespucci and everyone else, including you and me.

These people do not seem to listen to reason or to scientific evidence, which makes me wonder weather they are lunatics or whether they have a perverted sense of power in trying to convince others or scare others into believing that something ominous is afoot. The fact is that this ”make believe” is mostly done via videos on YouTube and social media. What amazes me is the number of people that actually fall for it and even start preaching this crap.

There is not an ounce of scientific evidence to substantiate this ridiculous theory and I am asking myself why some seemingly intelligent people would actually support
this theory.

I decided to write this article for my own and the readers’ protection from this deceit and to provide scientifically proven evidence that we are just a race of humans living and moving about on a sphere suspended in the void which we have named the universe.

While they say that Neil Armstrong never landed on the Moon and that the whole thing was staged by the American Government I would like to ask them if they have ever had a good look out of the window of a plane.

Flat Earth believers claim that Antarctica isn't a continent, it's a giant wall of ice surrounding the flat disk Earth and that noone has ever crossed the whole continent.
The fact is that people have and still do.

They also claim that the Earth is flat because pilots don't need to constantly dip the nose of their plane down to follow the curvature of the planet. How ridiculous!
Planes do not travel on a straight line, instruments on board, such as the altimeter, ensure that the correct distance is maintained in following the curvature of the Earth.
If the Earth is flat does it mean that when a boat disappears on the horizon it has fallen off the edge? The horizon may look flat but if you start to climb as high as you can you will start to see that the horizon curves.

All NASA photos of the Earth and other planets are fake! Well, isn’t it strange that It was the Soviet Union that stunned the world with the launch of Sputnik, the first satellite ever? On October 4, 1957, the USSR put into orbit a tiny sphere with a radio transmitter that beeped its way into history.

NASA were able to take picture of the Earth as early as the 1940’s and as a good measure look up the photos taken by the Apollo 17 crew in 1972 “Blue Marble” Earth.
Can you imagine saying that the satellites launched into space don't orbit the Earth? Tell that to all those that relied on satellites to watch their favourite TV programs.

These are but a few of the claims that are made to support the Flat Earth Theory, I am glad that they do call it a theory because the reasons they give are not facts but childish assumptions using childish statements that seem to be designed to pervert the truth and even people.

As I have said a load of crap on YouTube and social media, false news, false information that contributes to creating a mass paranoia. to filter this type of perverted made-up knowledge to prevent it from reaching the public at large and also making it illegal to publish or attempt to publish fake information unless it is clearly stated to be false using severe punishment as a deterrent, because it can ruin the life of those who believe it.


Start Blogging:
Click here to add your comments!
Other related businesses
Fired For You, Creative Holidays Spain
Follow us On

INTRODUCING BOOGIEKIDZ
Is an introduction to the basic movements and sounds of Hip Hop through music,rhythms, games, numbers and imagination with different characters.
Marbella Dance School & Russian Ballet School

All little girls want to be ballerinas!