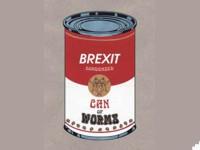 A can of worms

Who is responsible opening it?

Thank you Lord Sugar.It is about time someone spoke up and denounced those irresponsible people who effectively imparted lies to the voting population. Thank you for voicing the truth and stating that: Boris Johnson and Michael Gove should be in prison for Brexit lies. See video below link*

Members of parliament are duty bound to tell the truth to the people they represent. The people who elected them to do the job of protecting them and the nation’s best interests. So why did they lie about the cost of the EU and the investment of 350 million pounds that would be invested in the NHS? There is no logical explanation other than for personal advancement and ambition. So much for caring about the people’s and the nation’s best interests. I would go further than sending them to prison I would bar them from politics for life and I would include Nigel Farage.

But I do not think this is the whole picture, all the British nationals living abroad for more than 15 years whose whole life would be greatly affected by Brexit, were not allowed to vote. Had they been allowed to do so the result of the referendum would probably have been a lot different. Who is to blame for this? Mrs Theresa May? Is she really any different, pursuing a cause that clearly means hanging on to Nº 10 by her fingernails?

The best thing that should be done is to recognise the serious error that has been committed and either have the balls to retract art. 50, or at the very least, take a new referendum to verify the wishes of the people under the present knowledge of the truth.

A real can of worm is being opened for the advantage of a few irresponsible clowns and to the detriment of what used to be a great nation and its people. THERE ARE EXEMPTION WHEN SUBMITTING A TAX RETURN