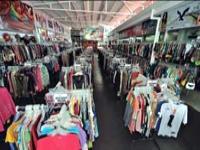 It carries its own invisible label. 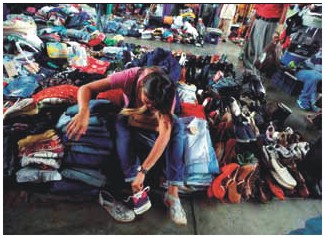 You can always tell when people wear second hand branded clothes as it generally means they cannot afford to buy from the current collections, second hand carries its own invisible label. For this reason it may be more sensible to buy even cheaper clothes from charity shops and do some good to help the needy at the same time.

Unfortunately a new trend has been growing for a while. Charity fraud, the act of using deception to get money from people who believe they are making
donations to charities, That is deceitful businesses accepting donations and not using the money for its intended purposes.

In many parts of the world charity shops and good causes are losing millions of pounds a year to bogus second-hand goods collectors who profit from our desire to help others and Spain is no exception according to lavozdelmuro.net.

Falsely disguised charitable organisations of doubtful reputation are minting money with donated clothes, often with the complicity of the local councils.

But, all one has to do is to stand by one of these containers to see that the clothes are not collected by a bona fide NGO* organisation. It seems that various local councils have signed agreements with one or more organisations permitting them to place and manage clothes collection containers in their cities in exchange for payments.

Quoting Madrid as an example reported by OCU, the Spanish Consumers’ Association, the council granted Ecotextile Solidarity permission to place 170 containers at a cost of € 3200 each, a total of € 612,000 a year. The first question is how much does Ecotextile Soldarity earn to make such an extravagant payment and secondly their full name is Ecotextile Solidaity S.L., a limited liability company; so where is the charity
part? Once collected, the items are then sorted and washed to be sold at the best possible prices to clothing merchants, textile recycling companies or African retailers.

Unfortunately these types of companies, declaring themselves as non-profit-making under their own name, collect tons of free clothes which they then sort and sell. The terrible thing is that people donating believe
they are helping the needy.

According to OCU’s estimates, 60% of donated clothes are re-usable and the rest is recycled to make yarns, rags or some other textile material. A company dedicated to the collection of clothes can earn some €350 per ton in sales to retailers, averaging €4 per item that cost nothing to acquire.

The better clothes are cleaned and resold as new to local markets and the rest is shared in their own shops all over Spain. What is actually left over that nobody wants may finally be sold to the needy abroad. To make matters even worse there are also some persons that place clothes containers totally illegally even at the risk of being found out and fined up to €1500 per container by the local council.

As usual, it is because of the few that the many have to suffer. Who wants to donate when there is a strong suspicion of malpractice?

According to official ONGs, many people have opted not to donate any longer. For the little that it may seem, your donation does count and there are people and organisations that work day and night free of charge and lies just to alleviate the suffering of this world, making sure that your help reaches the right objective, even though they may not even place containers anywhere.

The advice given is that you should check the reputation of the entity in question and if you have any doubts find another way to ensure that your help reaches the right people. There are reputable organisations such as Caritas, founded by the Church on the other hand you can always get in touch with a reputable ONGs for advice, you can find them on the internet. 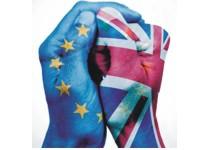 I ask if I can I seek asylum in Europe - Pregunto si Puedo solicitar asilo en Europa
David Cameron assumed the referendum would confirm Britain in the EU. - David Cameron asumió las consecuencias del referéndum
OUT of the pan INto the fire!

The plastic surgeon scalpel.Vanity or necessity?

The Costa is recovering!