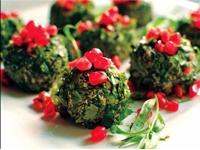 It’s hard to find dishes anywhere that so deftly intermingle Eastern and Western worlds. Sitting at the midpoint of ancient East–West trade routes, Georgians had the advantage of being able to cherry-pick the best of what the Greeks, Mongols, Turks, and Arabs were cooking along the Silk Road. Despite these outside influences, Georgian food remains steadfastly true to itself.

Throughout Georgia, cooks are die-hard about sourcing the best local produce, unless of course the ingredient is already growing in their backyards; it is this loyalty to freshness that accounts for the regional differences in Georgian cuisine.

In a country where meat was historically reserved for special occasions, it’s no wonder that elaborate vegetarian dishes continue to take center stage in Georgia’s culinary canon. Pkhali, a family of salads that might be better described as vegetable pâtés, are made with whatever vegetable is on hand (beets, carrots, and spinach are common) and served over bread.

The method is foolproof, to boot: Just boil the vegetable of choice, purée, and squeeze in some lemon juice, minced garlic, and a handful each of cilantro and ground walnuts for good measure.

Georgian cooks will often whip up several types of pkhali, plating them side by side and sprinkling the tops with pomegranate seeds. A classic one is a spinach and walnut dip with pomegranate (spinach pkhali)

Bigger & better Kokomo
If you thought that Cocomo Restaurant closed for their usual annual break you could not be more mistaken! Now its a bigger and better Kokomo!
You must try Khinkali at Tbilisi

Not just your average curry...