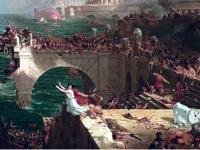 Is this the end of Europe as we know it?

The stupidity of mankind is remarkably unique and leading to self destruction.

Lets look at one of the clearest examples. It took some 500 years for the Roman Empire to become the greatest world superpower so much so that in our modern civilisation most countries recognised and adopted their democratic political system (Senatus Populusque Romanus) even most of todays legislation has been modelled on Roman Law. So what happened?

The decline and final disintegration is due to some very clear events that seem to be repeating themselves in present times yet we are failing to take warning The most obvious cause of the collapse has been attributed to some 300 groups of barbarians (the Visigoths, the Vandals, the Huns etc) invading and attacking the empire from all sides, diluting the military power, traditions and beliefs to its final disappearance.

Now compare this to the daily invasion of refugees coming from Africa and Middle Eastern countries. What are we doing about it? Are we such magnanimous humanitarians that we are prepared to sacrifice our values, traditions, religions and beliefs to be drowned and dissipated by such invaders?

Unfortunately, once they are here they do not adapt, they multiply and even expect us to adapt to their customs and beliefs. Granted no fighting is taking place, it is all done civilly, except perhaps for the exceptions that started to rear their ugly head in Greece. Nevertheless it is an invasion not dissimilar to that of the Roman Empire. So what are we doing about it?

Whilst Rome was under attack from outside forces, it was also crumbling from within due to a severe financial crisis. Oppressive taxation and inflation widened the gap between rich and poor. To avoid the taxman many of the wealthy members of the society removed themselves from the area and the system. Doesnt this remind you of what is happening now?

Romes size made it difficult to govern just as difficult as it may be to govern a United Europe. Of course political assassinations are not a common occurrence these days (or are they?), all the same I think that political incompetence and corruption may even exceed the Roman Empires levels, not to mention fraud. Romans lost their trust on their leaders as we seem to have lost it in ours and the banks.

One other relevant factor that contributed to the downfall of the Empire has been the loss of religious beliefs, traditions and Roman values as they were gradually replaced by the growth of Christianity. We certainly seem to be losing our faith in Christianity while other religions, one in particular, are getting an increasingly stronger foothold.

The fall of the Roman Empire is not an historical events that caused the fall of other great empires. China was also a mighty Empire once, however its collapse is due to the unwillingness to trade with foreign powers and the change from monarchy to a corrupt democracy where political corruption yet again plays an important destructive role.

China today is one of the largest world economies due to its massive 1.3 million population playing an influential role on the global economy yet it is still considered a developing country. Corruption, overproduction for the export sector and the ban on Chinese to invest abroad combined with the massive amount of corporate borrowing over several years to build high rise constructions in different towns which remain mainly unoccupied might explain the Chinese market crash in July and the more recent devaluation of the currency that wiped out trillions of its peoples savings. Doesnt this represent another case of failing to learn from past history?

Nihil novi sub soli (there is nothing new under the sun) so why do we keep repeating the same mistakes over and over again? We do not seem to learn do we? Clearly corruption and fraud driven by greed are the underlying factors that lead to the  destruction of individuals and nations but I really fail to see where the remedy might lie.

If religion and the fear of God are intended to touch the conscience and curb corruption we seem to be on a loser.