I have recently been back to England..

...to see my family and enjoy a well deserved short break. It was a while since I last had the opportunity to get away.

I am glad I did so because when I got there I realized that I had almost forgotten how well mannered and polite people are in England. I mean they are so well mannered that you feel obliged to respond the same way and say “Thank you, you have been most kind” and actually mean it. It felt like they could not do enough for you.

Of course I realise that shop assistants have to be polite and caring with all possible clients, however for the short time they attend to you, they do mean it. What a refreshing difference!

By contrast, here I usually get the feeling that I am a nuisance, interrupting whatever they may be doing. You walk into a shop or even a bar and get ignored until the attendant has finished dusting or other similar silly task.

What about that never ending conversation with someone who just walked in to deliver a letter or say hello? Has this happened to you? Have you ever felt more invisible? Or unwanted?

Even on the roads in England I noticed that drivers have the decency of moving over to another lane to give you the chance to join the faster road. They are considered and let you in or out of traffic, it is so refreshing to be able to be just as considered in return.

I know that queues were invented in England; the public in general is most patient. No one will ever attempt to interrupt or jump in between you and the attendant, they will patiently wait until it is their time to receive the full attention they expect.

I think this is called politeness and due consideration towards other people. “Tranquilo!!” They say here in Spain, when
you lose your temper for having your conversation rudely interrupted by some a...hole (here I go; making me swear again!),
who turned up from nowhere to jump the queue with the excuse that he or she is asking something terribly urgent and, before you know it, you are swept aside waiting to be served.

I have never known before the feeling of being a nuisance or an intrusion, I always thought that clients are important and need to be encouraged to come again, especially during these difficult times. Fancy opening the shops when they feel like it, and closing them the same way and not answering the phone; then they complain that business is bad while blaming the crisis and their adverts for not working.

And what about some good manners on the road? Overtaking on the wrong side, cutting up after overtaking as well as on roundabouts, not signalling, pulling out without looking, blocking the road to have a conversation through the window with a
friend and this is to name a few.

Unfortunately it’s not just the Spanish, it would seem that even some of the English seem to get their chip damaged here in Spain and behave just the same way. I wonder if it is something in the Andalucian air that affects people’s brains this way. I know they say that you do “in Rome as the Romans do”, but I thought that good education should prevail.

The other difference I noticed is to do with parking. Despite the incredible amount of vehicles in the villages and towns in England, you will find a suitable parking place even if you have to pay a nominal amount of money.

It is so orderly! Even residents living in highly populated areas have parking priority in their own streets although this may be
limited during night hours. When you get home from work, tired and hungry, you just want to park your car and not have to struggle to find a parking place miles away!

The local authotitirs here seem to think that the fewer are the parking spaces the greater is the scope for the more “multas” to can cash in. This is so short sighted! Not only it is unfair for the residents who already pay for using the local roads and other council taxes, it also discourages people from visiting or living in the area.

While most of Spain, and especially Andalucia, depends on foreign visitors and residents to provide income, they do not
seem to realize that the choice of where to go with just as much sun and even cheaper prices is much greater today than it’s ever been. You can’t take your pick and many are doing just that!

The crisis? If shops were better controlled to make sure they own up to their responsibility and stay open when they are supposed might also help to encourage more business. There seems to be a new trend for shops to close on Fridays after lunch. Have you noticed?

Provide adequate parking facilities, either free or paying, and people will find the reason to visit and spend money in shops
and restaurants. Why should they struggle for a spot to park and even get fined when they have the choice to go elsewhere?
No wonder the crisis is worse in Spain and especially in certain specific areas.

Complaints seem to fall on deaf ears. What an attitude!

I was given your article “Behaviour Breeds Behaviour” to read. You have taken the words out of many peoples’ mouths. It could not have been better expressed. Thank you. Did the editor write it. It was not signed. Mentioning the crisis. Mercadona is closed today. I thought yesterday was a holiday – it doesnt matter that the public are inconvenienced as long as they have their days off. Pity Tesco are’nt here. In Spain they think the word Service mean toilettes. They will never learn. It is a pity they were ever allowed into the EU until they qualified as a ‘First World Country’.

Editor's comments: Hi, Thank you for your mail and for reading Web Express Guide and I hope you will continue to support us. Yes, the article was written by me and I am glad that you approve of it. Kindest regards 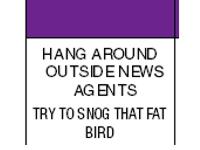 CHAVOPOLY! Small business ownership: DonÂ’t Give Up!!
Stick to Your Guns and Persevere - by Count de la Perrelle
Top Dog or Top Dick

Key words or real keys for consumers to find you?