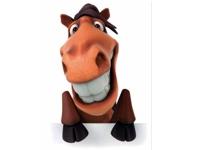 IÂ´m so hungry I could eat a horse! Or donkey?

With mad cow, foot and mouth and bird flu, just what is left to eat? What about horse meat hamburgers or Halal chicken sausages made of pork meat? This month the Prickly Pair look at cuisine and investigate whatÂ’s still available to safely put in your mouth.

Every time you picked up a newspaper not long ago or switched on the television, the first thing you used to hear is that another pigeon, swan, duck or other poor unfortunate bird was feeling a bit under the weather. There is nothing the worldÂ’s press like more than a really big scare story and talk of a pandemic sends them into raptures.

So, in search of the truth, I decided to consult the internet and as is the internetÂ’s wont, it was full of rubbish. One piece of information I did manage to glean from the world wide w**k however, is, and I quote that Â“Avian influenza viruses usually do not infect humans and that only 100 cases have been confirmed since 1997; these cases are thought to have resulted from direct contact with infected poultry and that no known cases have resulted from sustained direct human Â– human transmission.Â” You have to ask yourself therefore, just what were those people doing to those birds? Now, I like a bit of chicken as much as the next man, but you can go too far!

It was not so many years ago that human kind was going to be wiped out by Â“mad cow diseaseÂ” and mass hysteria put a stop to me being able to have a gnaw on a decent bone for a couple of years. The only bright spot in all the bird flu nonsense is that when a poorly goose was found in France, the French ran around like headless chickens (no pun intended) trying to convince the rest of the world that patĂ© de Foie Gras is no more poisonous than usual. The French cuisine being what it is of course the French tried to cure the problem by covering the poor birds in some kind of creamy white sauce. Unfortunately that seems to be the French way, and no Frenchman is entirely happy unless he is covering a bird in white stuff. Call me a heartless gloater if you like, but during the aforementioned Â“mad cow diseaseÂ” scare back in Britain, didnÂ’t the French call for a worldwide ban on the sale of British beef?

Casting my mind even further back, there was a massive scare about eggs a few years ago and we were all going to die from Salmonella poisoning; when the then British health minister Edwina Curry put it about that most eggs were contaminated with the bacteria. The British government implemented a huge program to vaccinate somewhere in the region of 20 million chickens against Salmonella and although this looked like trying to calm those bird flu scares a bit; it was only good news, after all, there can be no greater pleasure then dipping your little soldier.

So whatÂ’s happening now to send the press into raptures with some of the following headlines?

Â“Horsemeat has been found in a number of processed beef products across Europe, raising questions about the food chain. Â–BBCÂ”
"Horsemeat has been found in France in a shipment of 320 tonnes of meat labeled Â“pure beef Â” imported from Eastern Europe via Holland, a local prosecutor said on Friday. The firms could not immediately be reached for comment. Â–ReutersÂ”.
Â“We know that the discovery of horsemeat in products sold in several major retailers, including Tesco, has shaken your trust in food retailers and the products we sell. And Findus said it had been told that its products were being made with French beef, not Romanian horsemeat.Â”
Â“Donkey meat was allegedly found at two UK firms raided last week as part of the horse meat probe. - Mirror NewsÂ”
Â“Pork DNA has been found in Halal chicken sausages served in at least one primary school in London. -Evening NewsÂ”

The good news is that pork meat, donkey meat and horse meat do not kill. As a matter of fact horse meat forms part of an acceptable, even sought after, diet in most countries worldwide with the exception of a few, in particular the U.S.A. and U.K. The sound of laughter coming from the French and Italian equine butchers is deafening. Why? There in nothing wrong with camel meat either.

The bad news is that we should not be mislead and forced into consuming products that have been deliberately falsely labelled. That is where the problem lies, it is not the mad cow disease, itÂ’s the mad people disease; we should make sausages of those who deceive others for personal gain.

It does seem that almost all meat has come in for some kind of health scare at some time or another and if you were to listen to all the horror stories, you might think about becoming a vegetarian; on the plus side of this radical thinking is the fact that very nearly all vegetarians are built like a racing snake, but that is only because they are too weak to make it to the butchers. If that is not enough to convince you that this way lies madness, then just look at the patron saint of vegetarians, Linda McCartney. Being married to Paul McCartney, you would have thought that she would have needed extra red meat to stop any uncontrollable urges to tear his throat out with her own teeth. And as that lady is no longer with us, it would appear that living on a diet of apples and tofu is not all itÂ’s cracked up to be; I donÂ’t like to speak ill of the dead, but at the very least, her untimely demise spared a whole new generation the Â“Linda McCartney meat substitute sausageÂ”.

So I will leave you with a couple of words of consolation; if you fancy a nibble on a nice plump bird, donÂ’t let anybody talk you out of it, no one ever came to any harm by gnawing on a bone, and there can be no substitute for any real meat sausage. Bon AppĂ©tit!!

Does the Archangel Â“LariosÂ” visit you?
The Prickly Pair look at some of the medicine alternatives available on the Costa del Sol.
The urge to open a bar in Spain.

So, you wanna talk about it?