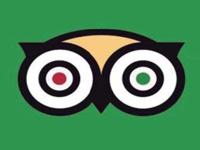 Perhaps a pinch of salt is required. By Count de la Perrelle

Tripadvisor.com is supposedly one of the most successful online travel businesses and a huge company to boot with more than 50 million online visitors per month, 20 million members and 30 websites translated into 21 languages with an eye-popping turnover of 486$ million in 2010. It operates under Trip Advisor® Media Group which consists of 20 distinct websites to include holidaylettings.co.uk and holidaywatchdog.com

A large organisation.
TripAdvisor was founded in 2000 by Stephen Kaufer with a mission to help travellers all over the world enjoy the perfect holiday. Financing was obtained from Flagship Ventures, the Bollard Group and private investors but, in 2004, the company was purchased by InterActive. The company now includes many famous travel company names including: WExpedia.inc, Smarter Travel, and BookingBuddy.com among others and further information can be found at companies house - www.duport.co.uk

An interesting review
With all this in mind, I decided to check out their review page for the Ritz Hotel in London, one of the finest Hotels in the world. Out of 723 reviews posted at the time, 502 said it was excellent, 125 said it was very good, 43 said it was average, 31 said it was poor and 22 said it was terrible. To be honest the above reviews sum up all that is simultaneously brilliant and at the same time irritating about TripAdvisor, the right for everyones opinion to be heard and given equal weight and the baffling contradictions in the reviews. ...beware the stuffy and outdated dress code! Apparently being dressed head to toe in Armani and having a Prada handbag just isnt good enough for this opinionated and petty hotel. Oh! For goodness sake!!

Visitors do praise the helpful staff and comfortable beds, but there are complaints about a musty smell and the dearth of gluten-free treats at afternoon tea.
Surely that is the whole point of a rich afternoon tea! I am sure that if one asked, the Management would supply whatever the Client required. On a more serious note though I found that if you log on to the Tripadvisor web site and type the words racist or racism into the search engine you are likely to be rather surprised by what you may find.

These words actually appeared in my search in more than 6,000 reviews. Pervert/perverted featured in over 500 reviews, homophobic/homophobia in 295, rapist in 200, and paedophile in 42. Whilst the owners and staff may well have various issues with customers, undoubtedly using this sort of negative language towards people it could be used by others just to bad-mouth them and their establishments.

Also do remember that most of the English-language reviews are possibly written by Americans (13.6 million users are from the US, while 4.5 million are from the UK), so as UK and European consumers it would be prudent to figure out whether they would have the same presumption of service and style as, say, a family of four from New York.

Can we trust the reviews of others users? Trip Advisor says that they check each review manually and perhaps this is or was the case. But I find it hard to believe that with 50 million monthly reviews and around 1200 employees, they are really able to offer this manual review service. Also what about the various user scams that would make it rather difficult for Tripadvisor to be sure that all the reviews are true or reliable?

Taken to task
In my opinion, Tripadvisor has caused a great deal of frustration amongst consumers. It has definitely stimulated anger in the travel and catering industries. I am aware of many Hoteliers who are exasperated about the reviews and assessments that have been posted about them or their businesses and they are beginning to fight back. There is an online reputation services company called KwikChex acting on behalf of more than 1,000 hoteliers. The company estimates there are around 27,000 legally defamatory comments that have been made on TripAdvisor, allegations that are false and should, if necessary, be tested in court.

Tripadvisor has also been taken to task by Britians advertising watchdog for using misleading wording on its website. In an adjudication released recently, the Advertising Standards Authority (ASA) decreed that phrases such as Reviews you can trust, read reviews from real travellers, TripAdvisor offers trusted advice
from real travellers and More than 50 million honest travel reviews and opinions from real travellers around the world breached two codes of the Committee of Advertising Practice. Reviewers are required to confirm that they are giving their own opinions, but since TripAdvisor does not verify the reviews, such declarations are open to abuse. In September, TripAdvisor actually changed some of the wording on its site and Reviews you can trust became Reviews from our community. Apparently the website has been targeted with fake reviews. While anyone can write and be asked or paid to write favourable reviews, some establishments are being given poor write-ups by rivals who want to boost their own trade.

Malicious customers have even tried to blackmail establishments with threats to post negative reviews. You can end up spending as much time choosing a place to stay or eat at as you spend away on holiday or at a restaurant. My advice is to use your common sense, do not believe what you hear or read only what you see yourself. Remember to take that important pinch of salt!! 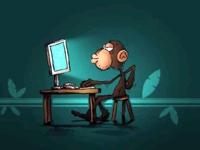 Monkey see, Monkey do!
Mimicking must be something that humans have inherited from monkeys; it has never been more evident than now. Some helpful tips for the advertiser on the Costa del Sol  by Michael McCrae
Key words or real keys for consumers to find you?

People say I am egocentric... But enough about them!