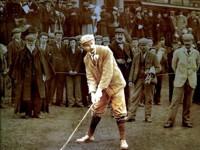 Golf! Hitting a ball with a stick!

Who was first to hit a ball with a piece of wood?

On the 23rd of September we entered the autumn season and the early start of the golf season, a major sporting and extremely popular event worldwide. But did you ever wonder how it all started? As a matter of fact this is the subject of innumerable debates amongst historians.

Some maintain that the game was invented by the Romans who, as a result of their conquests, introduced their paganica game throughout their empire; a game in which players used a bent stick to hit a stuffed leather ball. Others maintain that the origins of the game lay in China because of a Ming Dynasty scroll dated 1368 that shows a member of the Chinese Imperial Court swinging
what appears to be a golf club at a small ball with the aim of sinking it into a hole. Others even believe that golf originated in ancient Persia. It is a known fact that kolven was a game played in Loenen, Holland, as far back as 1297; this too involved hitting a ball with curved bats.

Having said all this, it is also a known fact that in the 15th century the Scots used to play a similar game with the difference that instead of a ball they used a small rock. The object was to hit the rock from a given point to another with as few strikes as possible. Why not a rock? Well, they use a tree trunk (caber) instead of a javelin; a stone put weighing 22 lbs instead of a shot put and they throw a hammer also weighing 22 lbs. It must have something to do with all that porridge they eat!

Whilst it is impossible to say exactly who invented the game, there is no doubt that the modern game originated in Scotland because there is clear evidence that James II banned it in 1457 along with football, stating that the game distracted people from learning and practicing archery.

It was the Scots who made a singular improvement to all the games that came in the ground, and made getting the ball into that
hole the object of the game. The first Standardized Rules of the game were written in Edinburgh in 1774 The evolution of the golf ball is another story, eventually, tired of hitting rocks the next attempt was balls made of leather and feathers and then followed the ball made from Gutta Tree sap. Later in 1898, Coburn Haskell invented the rubber cored ball which could reach distances of 400 yards or more. In was not until 1905 that William Taylor introduced the first dimpled golf ball.

What made golf an expensive sport to play and how golf got the reputation of being a high class society sport is attributed to the golf clubs. In the early days, golf clubs were carved by the golfers themselves but the earliest known set of specially made clubs was made by a bow-maker for King James IV of Scotland. The construction of golf clubs was time consuming and expensive and it included using various types of wood bound with leather. Some rather expensive toys, especially as they broke very easily.

The first golf tee that stuck in the ground was made of rubber, but had a metal spike to make it able to penetrate the ground. This tee was patented by Percy Ellis, whereas the tee we know today was patented by PM Mathews in 1897.

An expensive high class society sport needs its players to portray the correct image. Through the centuries, golfers have maintained some of the most unique fashion styles in the sports world. From the jackets and trousers of the early 1900s to the bow ties of the 1930s and the outrageous colors of the 1980s and 1990s, golfers have remained on the cusp of style.

But its women golfers that improved the overall atmosphere of the game. From sweaters to golf polo shirts to shorts, skirts and pants as well as shoes and golf gloves, all apparel choices become important to secure the comfort one needs.