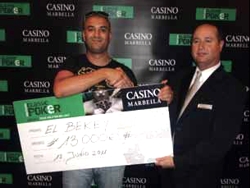 Without doubt his strongest rival was ¬ďDrakula¬Ē, one of the most charismatic Spanish Poker players. ¬ďDrakula,¬Ē confessed to have played a very hard Poker
game and offered his sincere congratulations to the winner.

Participation by real Texas professionals was represented by players like Oscar Blanco ¬ďLa P√ļa¬Ē, the Madrid player who bagged many victories at the fourth edition of ¬ďTangier Poker Million¬Ē, Mario S√°nchez Cano, from Malaga, a 23 year old with an impeccable track record last year or Joaqu√≠n Serrano ¬ďYiyo¬Ē, who gives no truce to anyone in the course of the MCP.

More than 12,000 fans shared the tension of the tournament online when tracking the Malaga Poker hand. The tracking instantly shows all the moves, the different movements, Cheap Count, interviews and actions to compose the complete picture of a great league, the Marbella Poker Classic.

As a result of a higher number of participants and the number of re-buys made in the previous stage, as much as ¬Ä43,635 were distributed in prizes. The
increased extra points in repurchase motivated the players to almost double the previous stage Rebuys.

The next stage of the League to be played from 30 to 31 July, will be a special edition with ¬Ä500 for Buyin and a ¬Ä 500 Rebuy. Players will be able to qualify via
the different satellites that feed the Casino Marbella.

All information is available on www.casinomarbella.com Two tournaments, three Cash Game tables and many professionals, closed with a ¬ďfinale¬Ē weekend of
intense Poker Casino Marbella.

The successful completion of the 1st Senior ITF ¬ďCOPA NORDEA¬Ē at Bel-Air Tennis Club.
The matches took place over the five days of the 16th to the 20th of May with almost one hundred participants of different nationalities.
The winner of the 4th leg Marbella Classic Poker gets ¬Ä11,000

Art Exhibition at the Casino Marbella

Linea Directa - Motorbike and car insurance with travel assistance on the Costa, in Spain and rest of Europe