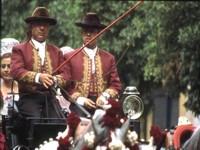 A taste of Traditional Spain

This year the Jerez Horse Fair (La Feria del CaballoĀ”) will take place between the 8th and 15th of May.

It was Don Alvaro Domecq, the founder of the world famous Real Escuela Andaluza del Arte Ecuestre, who converted the annual Ā“feriaĀ” in Jerez into an event that has become one of the most important events for horse lovers worldwide, when he held the 1st Horse Week in 1955.

The fair and the equestrian program make this a major international attraction, while giving everyone the opportunity to savour traditional
types of food and an incredible variety of local Ā“SherriesĀ” and Ā“BrandysĀ”. Hundreds of riders and horse drawn carriages parade in the Real, a spectacular show of traditional costumes, carriages and horses.

There is clear evidence that Jerez is also the home of the pure thorough bred Spanish Carthusian horses, the famous Dancing Horses. These horses are sought after all over the world for their beauty and for their ability to learn and perform what is normally impossible for other horses to do.

When in Jerez, in between one brand of sherry and another of Brandy, one should complete experiencing the true Andalusian flavour and make the effort to see a dancing horse show at the Royal Equestrian Art School. In any case, loads of competitions and shows will be taking place all over Jerez during the course of the fair. These comprise all types of horse riding styles such as dressage, Doma Vaquera, RAID, Polo and so on.

If you truly become fully absorbed into the Andalusian mood, you may also wish to take a peek at the Ā“Yeguada la CartujaĀ”, Ā“EQUISURĀ” and the Ā“Feria TaurinaĀ” (Bull Feria), the aggregate of the whole thing makes the Feria a spectacular collection of colour, folklore, tradition in every sense of the word, and it highlights the true hospitality of the real Andalusian people that is certainly not found on the Costa.

One day is not enough, and you certainly do not want to miss the week-end of the feria, when things really get going. If you want to visit
the different museums, the sherry manufacturers, accept invitations and go sightseeing, you should really consider taking a few days off.
The party goes on all day and night everywhere at the Real (fairground), on the avenues and in the casetas (fair booths). During the whole
week, guitars, wine, dancing and singing play an all important role for those who come to the fair and the Gonzalez Hontoria Park turns into a huge party; a place where everybody is invited.

The Costa del Sol is now no manĀ’s land, even the Spanish have learned to speak foreign languages with the result that places like Jerez loose thir traditional flavour. Times change and things evolve, however the essence and the festive character of the fair have been maintained unchanged.

Andalucia is more than a place in the sun