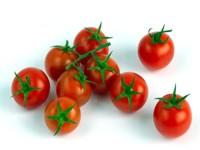 The redder the better

Did you know tomatoes are of the same family as the deadly nightshade?

There are few vegetables that better mark the summer months than the sweet juiciness of a tomato; the best is when they are in season from July through September.

Although tomatoes are closely associated with the Italian cuisine, they were brought into Europe from Mexico by the Spanish  conquistadores. The plant was looked upon with suspicion and most people would not eat it because of its links with the nightshade, a very toxic plant.

They could not be more wrong! Tomatoes contain large amounts of vitamin C, the equivalent of 40% of the daily value and also contain 15% of vitamin A, 8% potassium, and 7% of the recommended dietary allowance of iron for women and 10% RDA for men.
The red pigment contained in tomatoes is called lycopene.

This compound appears to act as an antioxidant, neutralizing free radicals that can damage cells in the body. Only recently, studies have revealed that lycopene may have twice effect of betacarotene.

Research at Harvard discovered that men can cut the risk of prostate cancer by 45% with 10 servings of tomatoes per week. According to Italian researchers, the risk of rectal colon or stomach cancer can be reduced by 60% with just 7 servings of tomatoes per week. Israeli researchers have found that lycopene is a powerful inhibitor of lung, breast, and endometrial cancer cells. Research has also indicated that the lycopene in tomatoes can help older people stay active longer.

New research also seems to indicate that tomatoes may be used to help prevent lung cancer. When choosing your tomatoes, be sure to pick those with the most brilliant shades of red, indicating the highest amounts of betacarotene and lycopene.

Tomatoes dont lose any of their nutritional value in the high heat processing, so canned tomatoes and tomato sauce are both just as viable and beneficial as fresh. Lycopene is more fully released if the tomato is cooked in a bit of olive oil. 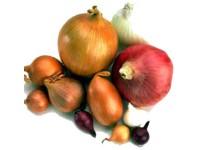 Onions to you too!
Onions have been used by all cultures in the world since time immemorial and are the second most popular crop after tomatoes.
Why do people have colonic irrigation?

The Wonders of Cinnamon