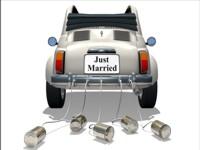 When is the best time to get married?

It is said that moving home and getting married are two of the most stressful events in life, and if you met my wife you would agree.

Marriage is a time of bliss and excitement; its entering into the unknown in a day when we experience more emotions in a few hours then a normal working year. A day when cost caution can go out the window and panic sets in as we fear that things may go wrong on the special day that is never forgotten.

Well, for the romantics out there, you would probably say February 14th, and why not? However, as far as I am concerned, I would say June.

And why June? You may well ask. Well, June is named after Juno, the roman goddess of marriage, it is also said that Juno has vowed to protect those that marry in the month of June. She also guarded over the Roman Empires finances and was also known as Juno Moneta, the modern Italian word for money. So with Juno protecting you, then surely you are heading for a long and prosperous marriage. And, as an added benefit, it coincides with the start of the so called warmer months.

With more and more couples opting to marry abroad due to the unpredictable weather associated with the UK and Northern parts of Europe, (believe me, I got married in the UK in the middle of July and it hammered down the whole of the 10 days we were there), what better place to get married then the Costa del sol or Gibraltar.

To begin with, Southern Spain is just a short flight away and you are virtually guaranteed sunshine. It is by far cheaper than say, the Caribbean or the Indian Ocean islands further more it is unlikely you will suffer from jet lag problems. Because of the reduced travel costs and the popularity of Spain as a resort, the attendance by guests is far greater than that in any other locations, especially the far away destinations.

No need for long, time consuming formalities, in Gibraltar you can get married with as little as 24 hours notice. Can you imagine the complications dealing with a marriage licence in advance in some other far away place? There have been some famous weddings in Gibraltar and some may remember Sean Connerys wedding and John Lennons.

Spain itself is a Catholic country, the church wedding and formalities are somewhat more complex than in Gibraltar, nevertheless it is a possible alternative and the way to go about it has been illustrated on our article in edition Nº 83 (http://www.webexpressguide.com/costadelsol/article.php?art_id=311&id=2017).

The most expedient way to get married on the Costa del Sol is to get married in Gibraltar, thus simplifying the legal formalities and then have a blessing in church in Spain followed by a reception in Spain. The whole thing works out a lot simpler, smoother and even cheaper. It is probably best to recruit the services of a wedding planner, especially if you are not resident in Gibraltar or Spain. Wedding planners can organize the whole thing and most certainly avoid any problems on the day.

Can you imagine a wedding lunch with a full view of the Mediterranean Sea reflecting the suns rays in the horizon? Tables well set; a first class service and food fit for a banquet? Then, as the sun sets in the horizon and its reflection is replaced with the reflection of the moon lighting up the dark water surface, the music marks the beginning of the evening reception and the farewell of the couple into their future.

The bonus is that they do not have far to go for the honeymoon. Now that is a wedding to remember!

If your wedding was a sad little affair in a small church in England, followed by a reception after get drenched in the rainstorm on your way to it, let me brighten you up with a few lines meant to make you smile:

The best way to get most husbands to do something is to suggest that perhaps theyre too old to do it.

I think men who have a pierced ear are better prepared for marriage. Theyve experienced pain and bought jewellery.

At the cocktail party, one woman said to another, Arent you wearing your wedding ring on the wrong finger? The other replied,
Yes, I am, I married the wrong man.

Just think, if it werent for marriage, men would go through life thinking they had no faults at all.

How do most men define marriage? A very expensive way to get your laundry done free.