The 20th June 2009 was World Refugee Day. It was also the day that Bjorn Heidenstrom started out on his epic journey from the Nobel Peace Centre in Oslo, Norway heading for Robben Island, Cape Town, South Africa. Mostly cycling, with some hitch-hiking, Bjorn is planning to reach South Africa by April 2010. Collecting football shirts en route, Bjorn has already cycled through over fourteen countries in Europe, so far, including Sweden, Finland, Denmark, Russia, Belgium and the Netherlands. He made it to the UK for the start of the football season and he has been presented with shirts from Liverpool FC, Manchester United and even Sir Elton John, who signed a jersey of his favourite team, Watford FC.

Bjorn´s goal is to collect as many football shirts as possible while visiting schools, businesses and football clubs along the route giving talks on his expedition and collecting the shirts which will then be sewn together into a gigantic football shirt to be displayed at the World Cup 2010 in Capetown, South Africa.

With an estimated audience of 900 million people, this will be the worlds biggest television event which should ensure the best media coverage possible for Bjorn´s project.

Five months into his journey, in November 2009 , Bjorn reached the Costa del Sol where he spent some time with the pupils and staff at Mayfair Iinternational Academy and collected yet another shirt to add to his growing collection. The Mayfair Academy football shirt will join shirts from some of the biggest football clubs in the world, including Liverpool, Manchester United, Atletico Madrid and Barcelona.

Speaking to pupils at Mayfair Academy, Bjorn inspired them with the presentation of his journey so far; cycling on some of the most dangerous roads in Europe; having his bicycle stolen in Amsterdam; fending off dangerous dogs; coping with the cold and the aches and pains of cycling. Bjorn also spoke about the kindness and generosity of the people he has met en route and how he hopes that his trek will create awareness which, in turn, will create support and help for millions of refugees.

On the same day as Bjorn´s visit, Mayfair Academy pupils also enjoyed a training session with ex professional footballer Jamie Fullarton. Jamie has made over 350 appearances in the top divisions of England, Scotland and France and he now devotes his time to developing the talents of young players aiming to launch their own professional careers. In conjunction with Mayfair Iinternational Academy, Jamie is currently working on establishing a ´Football Academy´ where players aged between 16 and 18 will embark on a two year programme to enable them to achieve the necessary training and experience in order to achieve a professional contract with a football club.

Players will be prepared to travel to the UK for trials at a professional club of an appropriate level and scouts from the UK will pay regular visits in order to monitor progress. During the unique two year course, players will also qualify as Gym Instructors and Personal Trainers with additional qualifications in Exercise to Music, Body Pump, Spinning, Step Aerobics, Client Appraisal and Nutrition / Weight Management. Players will have the added bonus of the opportunity to achieve FA Level 1 & 2 Coaching Badges. 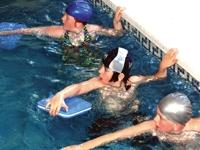