Name this person and win a free meal for TWO valued at ВЂ25 in total with a bottle of house wine at FlahertyВ’s Irish Restaurant at the Puerto Deportivo de Sotogrande. Send your entry by Fax to 952 893 146 or e-mail to editor@webexpressguide.com by the 25th October. The first correct answer to be drawn will be the winner. With your answer, you must supply name, phone number and area where you live.

I was born on July 30, 1941 in Ottawa, Canada. Encouraged to sing by both my parents at an early age, I recorded my first single at the age of 14. In 1957 I went to New York City where I auditioned for American Broadcasting Company ABC, singing a love struck verse I had written to a former babysitter.

The song brought me instant stardom as it rocketed to number one on the charts. The record is one of the best selling 45s in music history. I followed up with four songs that made it into the Top 20 in 1958, making me one of the biggest teen idols of the time. I toured Britain and then Australia.

My talent went beyond singing and I have written mega hits for other very well known and very famous singers.

In the 1960s, I started acting in motion pictures as well as writing theme songs for them. More than ten years passed before I had another number 1 in a duet. In 1990 I became a citizen of the U.S.A. and in 1999 returned to my parentВ’s birth place in Lebanon for several sell-out performances.

The greatest thing that happened to me was to get married to a former Miss Sweden in 2008 and I am looking forward to my long and healthy journey with my soul mate, my son and my step daughter. WHO AM I? 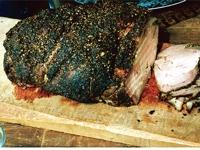 This Month's Recipe: Peppercorn Roasted Pork in Vermouth Sauce
Friends for dinner? Try this recipe. While the peppercorns and the garlic enhance the superb flavour of the pork shoulder, the vermouth sauce adds that masterful, one ingredient touch that makes this dish into a super delicious meal that is not easily forgotten.
This Month's Recipe: Oysters in Champagne Sauce