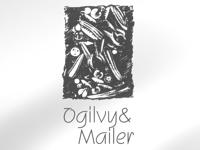 Introduction
Ogilvy & Mailer is a small restaurant, first established some 15 years ago, right in the heart of Â“Golf ValleyÂ”. It has always had a good name for its food and its discreet ambience. When he lived in Marbella, Sean Connery was a regular but not the only famous personality to eat there. Rod Sstewart, Aalan Sugar, Max Clifford, Cheryl Cole, Martine McCutcheon, Jim Brown, Maureen Lipman are but a few of the many TV presenters and personalities who have eaten there and still do. We just had to find out what made this restaurant so well known.The Staff Â– Ii thought the waitresses looked very neat in their black outfits with the white trim provided by the white shirt collars. Ii found them pleasant, courteous and willing to oblige and they all spoke perfect Eenglish. Cconsidering that almost everyone ordered a different dish from the menu, Ii think the service was quite good.

Atmosphere Â– Even standing outside at the main entrance, you get the feeling that this is a restaurant with a character of its own. I think the French would say Â“un petit bijouÂ”. The small bar and waiting area, the elegantly laid tables within the main part of the restaurant and the tables on the secluded terrazzo by the swimming pool are an invitation to both diners who need a bit of privacy or wish to be discreet and the others. It is so adaptable! I think that as a group, we created our own atmosphere yet, had we come individually we would have also done so but in a different way.

The Menu
The cuisine was described as Iinternational Creative, emphasising creativity in respect of flavours. The menu comprises a variety of starters, main courses and desserts with the addition of side orders and some pastas; quite comprehensive and designed to ensure the freshness and quality of the produce on a daily basis. When designing with flavours, the freshness of the produce is of paramount importance. As I always say from personal experience on the Costa, a short menu is usually a guarantee of produce freshness and in this case you can certainly taste it.

Wine List
The wine list offers a sensible choice of wines and champagnes but we selected the house wines which we all thought was an excellent choice. The red in particular received a lot of praise from many of the diners. 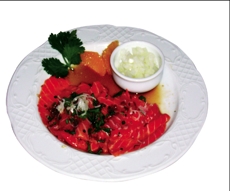 Sashimi of Salmon
Salmon in a coriander, ginger and lime sauce, decorated with a couple of orange segments and a coriander leaf. Aasmall separate dish with chopped onion was also included. FBA Â– The salmon was delicately sliced sideways so as to present a striped effect. I am rather fond of sashimi but this was certainly very pleasantly different. It was absolutely delicious and certainly a new creative flavour, making sashimi a western delicacy.
Team score Â– 10/10

Tataki of Beef
Another Japanese inspired dish presented with a rosemary and honey dressing. FBA- The cooking concept might have come from the Far East but the flavour was most definitely very western. The diner who ordered it described this as Â“beautifully tender with a gorgeous sauce. Really excellentÂ”
Team score Â– 10/10 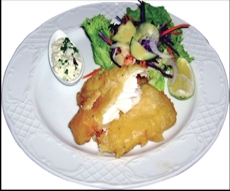 Pan Fried Calves Liver
Served with mash and a sage butter sauce and I think that the best description of this dish is far too plain to describe it properly. FBA Â– I think there is a lot more to it than it would first appear because it was selected by 5 different diners and they have all made very similar comments that ranged from very good to excellent. I could not convince anyone to let me taste it but shall make a point of ordering the next time visit.
Team score Â– 10/10

Tempura Rosada
Some of us continued with the Japanese theme and we were not disappointed. Tempura, meaning fried in a special light batter, I tried to find a translation for Â“rosadaÂ” but could not. This was served with as mall salad, a slice of lemon and a small dish of tartar sauce. FBA Â– It was not really tempura and it was not really fried fish in batter. Very light, fleshy, boneless fillets of white fish that was a delight to the palate, especially when dipped in the tartar sauce, which again was somewhat different in taste that the usual. Really, really nice!
Team score Â– 9/10 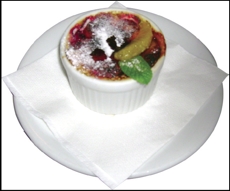 Sticky Toffee Pudding
The difference? A walnut toffee sauce to moisten it. FBA Â– What a killer! If you fancy this type of pudding then it seems this can be recommended! It is what one would expect and more.
Team score Â– 10/10

Bannoffi Pie
You donÂ’t often see this on a menu, probably because it takes so long to prepare. Some of the diners were delighted to order it and they were not disappointed. FBA Â– Well presented, as everything else, it was described as very rich and creamy just as you would expect. Did they forget to say very sweet? But then isnÂ’t that exactly what itÂ’s supposed to be?
Team score Â– 9/10

Summary
This is a stylish little restaurant that has built a good reputation over the years. It is very talked about and I think all of our diners knew of it, even those who had never eaten there.
Located in the heart of Golf Valley, in a very sought after area, it has served, and still does, many famous people, some of whom do prefer discreet locations, but as I described earlier, the restaurant can also give satisfaction to the small groups of people such as ours, without causing displeasure to others.
Everyone, without exceptions, stated that they had a very enjoyable evening. ItÂ’s nice to know that everybody enjoyed the outing and it certainly proves the point made above about the restaurant. I think the price was fair for this type of restaurant.

The WXPG food review Â– Restaurant at the Marbella Casino