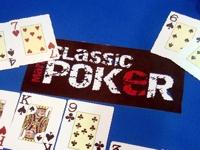 Poker has become the most played game at the Casino de Marbella.

As a result of the success of the tournaments since March 2008 and the increasing number of players, Texas Holdem poker is now the star game at the Playing poker in person is of much greater amusement and with many more advantages than playing online; plus the obvious professionalism of the organisers is a guarantee to all players. The first class restaurant and the availability of other games such as slot machines, Black Jack, Roulette offer an additional variety of live entertainment.

This years challenge was to organise a poker league tournament in 6 stages, the last of which is to be played from the 6th to the 8th of November with some rather attractive prize moneys.

In addition to the cash prize, the winner will also receive a ticket for the Irish Open, worth 4500, sponsored by Llii Poker. The second and third winners will receive tickets for the Cirsa Poker Tour to be played in Latin America and worth 3000 each.

The maximum number of players for each stage is 120 with a three days duration (Friday to Sunday), although sit and go qualifying games are available on other week days before each stage.

The last league game, from the th to th November, represents the achievement of a whole years experience and the conclusion of a successful Poker Season at the Casino.

More stages and greater prizes are planned for next years poker season.

Players from all parts of the world contributing to a maximum attendance of 120 players at each stage have turned this event into the Marbella Classic Poker game.

The increasing demand for the game has resulted with the Casino launching the Friday Poker Fever weekly tournaments with a maximum of 7 0 players. Its Texas Holdem No Llimit with a buy in of 100, 50 unlimited re-buys up to the final of the 4th level + 1 add on. This means that each player can play with an initial 3000 points and can buy another 3000.

The strong betting allowed at the Ccasino de Marbella at Ttexas Holdem poker is converting the Ccasino into a meeting place for all players of the game on the Ccosta del Sol and surrounding areas as well as an attractive tourist attraction for young generations coming from all parts of Spain and Eeurope.

The final goal is to get the Casino de Marbella to be recognised as the reference point of all poker games and tournaments on the Costa del Sol.