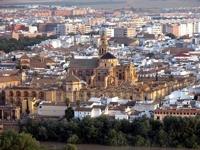 The Mezquita of Cordoba is one of SpainĀs most impressive buildings and one of the most remarkable tourist attractions. 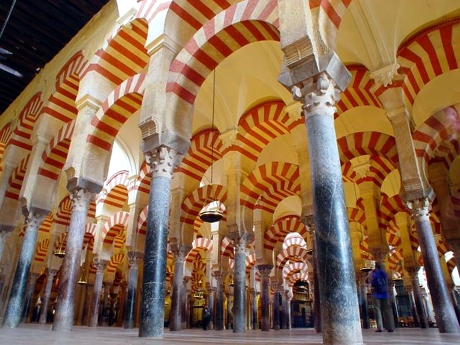 Cordoba is one of the oldest towns in Spain, with evidence of its existence dating back to the Bronze Age. Although it takes more than a week end to appreciate the history, traditions and architecture of Cordoba, it certainly makes a pleasant week end drive if only to see the splendour of the Mezquita. Winters are cold and summers quite hot in Cordoba, hence the best season to visit the city is summer or spring.

Each year approximately 1.5 million tourists marvel at this impressive landmark which features various architectural styles and which unites Islamic and Christian cultures.

The Cathedral was a formerly a mosque, the largest mosque in the world and now the largest temple in the world. Stretching across 24,000 square meters and featuring as many as 856 columns made of marble, granite, jasper, and other fine materials, the building is of gigantic dimensions. These columns were the remains of a Roman temple and other buildings that had occupied the Mezquita site previously.

The history dates back to more than a thousand years, back to the 8th century when Adul-Rahman I marked the beginning of its construction in the year 785 that lasted for 200 years. The construction and enlargement of the Mezquita lasted for three more generations under Adul-Rahman II, Adul-Rahman III and Al Mansur in 987. The mosque was converted to a church when King Ferdinand III recaptired Cordoba from the Moors.

Within the Mezquita, in the very center, is a Renaissance cathedral, which Bishop Alonso Manrique began build in 1523. The cathedralĀs construction lasted until the beginning of the 17th century. Although parts of the column hall had been destroyed as the cathedral was constructed, the building is still a remarkable and dazzling symbol of fine Moorish architecture.

Due to its outstanding historical development, and the influence of different cultures, the Mezquita portrays architectural treasures of several eras, including Greek-Roman, Egyptian, and Visigoth styles. A Byzantine mosaic with praising inscriptions can be found in the southern part of the Mezquita.

The holy cathedral inside the mosque features 16th and 17th centuries styles: Spanish-Flemish vaults, Renaissance domes, and baroque altar vaults. The treasure chamber houses remarkable religious pieces from the 15th and 16th centuries. A monstrance, manufactured by German goldsmith Heinrich von Arfe 1510 until 1516, is probably the most magnificent work of the chamber. 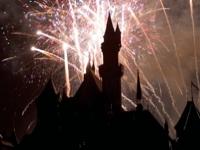 A time to plan a visit to Disney World
Disney World is not coming to Manilva!
Cruises Ā value for money!