The National Curriculum, which was introduced for state schools in the UK, has been in place from the early 1990s.

This was devised to ensure that every child would be taught the basics, generally the three Rs, and there would also be balance and variety in their education. The original purpose of the National Curriculum has, over time, been subverted into a testing regime whereby pupils memorize the answers required without understanding the hows and whys.

Inadequacies in primary education naturally feed through into secondary schools and beyond and it must be remembered that to stifle interest and curiosity in primary pupils risks stunting their development quite as much as an ability to spell. Independent schools do not have to follow the National Curriculum, although a surprising number do, especially for younger children.

At Mayfair International Academy pupils follow the National Curriculum and Numeracy and Literacy do play a major part in the primary school day, however, pupils also develop their personality and gain confidence and self esteem through breadth and creativity in all subjects. The staff is very well aware that what is measurable is not all that is valuable and children learn nothing by being over tested except how to recognise exam-induced stress. Whilst some testing is obviously necessary, a broader approach to the curriculum can foster an additional measure of interest and enthusiasm that raises standards of its own accord but not to a counterproductive level where focus on solely testing has the effect of depressing achievement. The balance has to be right  learning should be fun and there should be a greater awareness of the importance of creativity and spontaneity in childrens learning.

Pupils of Mayfair Primary School enjoy the best education available! From the one to one Literacy sessions to the wealth of musical experiences offered, with the opportunity to learn to play various musical instruments, to the water skills lessons, which continue throughout the year, combined with a plethora of activities both during and after school hours. For example, the recent book week had pupils dressing as characters from literature and the four houses competing with each other for points in the exciting book quiz. The primary school was temporarily transformed into a wonderland for a week, thanks to the wonderful paintings and effort of the Head teacher and staff.

Throughout the year, after school activities are changed on a termly basis and may include fencing, swimming, gym club, etc. Two new activities, the Cinema Club and the Cookery Club, where pupils have enjoyed making chocolate sticky things and Welsh cakes, amongst other culinary delights, have proved extremely popular. Academic achievements at Mayfair Academy are recognised and rewarded with certificates from the school and sporting achievements are recognised with certificates from various boards including the Football Association and the Amateur Swimming Association.

The warm and friendly environment at Mayfair Academy, combined with bright and colourful classrooms and a dedicated teaching staff proves their belief that AT THE HEART OF THE EDUCATIONAL PROCESS LIES THE CHILD 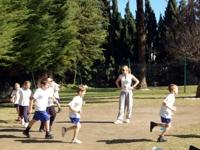 Another First from Mayfair International Academy