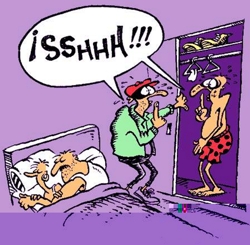 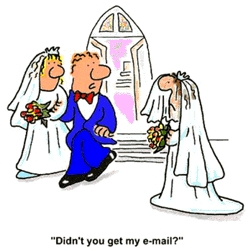 What's the difference between chopped beef and pea soup?
Everyone can chop beef, but not everyone can pea soup!

I've been on so many blind dates, I should get a free dog.

We are born naked, wet and hungry. Then things get worse.

Marriage is not a word. It's a sentence.

"I am." is reportedly the shortest sentence in the English language. Could it be that "I Do" is the longest sentence?

All I ask is a chance to prove money can't make me happy.

From a passenger cruise ship, everyone can see a bearded man on a small island who is shouting and desperately waving his hands. "Who is it?" a passenger asks the captain. The cruise ship captain replied, "I've no idea. Every year when we pass, he goes nuts."

In an argument, a woman always has the last word. Anything a man says after that is the beginning of a new argument.

Being in politics is like being a football coach. You have to be smart enough to understand the game, and dumb enough to think it's important.

There is no longer a need for the neutron bomb. We already have something that destroys people and leaves buildings intact. It's called a mortgage.

Did you hear about the two antennae that got married?
The wedding wasn't too great but the reception was perfect.

Despite the cost of living, have you noticed how popular it remains?

Patient: How much to have this tooth pulled?
Dentist: 200
Patient: 200 for just a few minutes work???
Dentist: I can extract it very slowly, if you like.

An extremely slim man went in to a bank on his hands and knees begging for a loan so he could feed his family. The nice banker issued the loan and said, "I suggest you go right out and buy some food." The man said, "Don't tell me what to do with my money!"

If you think there is good in everybody then you obviously haven't met everybody.

When I was young I used to pray for a bike, then I realized that God doesn't work that way, so I stole a bike and prayed for forgiveness.

What four animals does a woman like to have in her house? A tiger in bed, a mink in her closet, a jaguar in her garage and a jackass to pay for it all.

Two drunks were walking home along the railway tracks.
The first drunk says, "There's a hell of a lot of steps here."
The second drunk says, "I'll tell you what's worse, this hand rail is bloody low down" 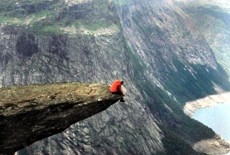 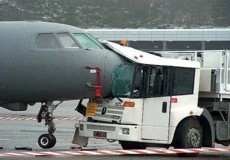 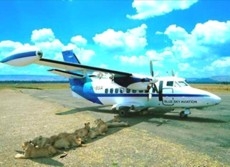 THE QUIZ Who am I?
Name this person and win a free meal for TWO valued at 25.00 in total with a bottle of house wine at Flahertys Irish Restaurant at the Puerto Deportivo de Sotogrande. Send your entry by Fax 952 893 146 or e-mail to editor@webexpressguide.com by 15th December. The first correct answer to be drawn will be the winner. Please supply name, phone number and area where you live.
Horoscope Costa del sol