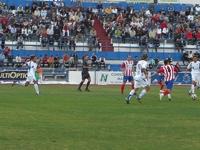 On the 11th May Marbella triumphed in the last home match of the season and avoided automatic relegation.

UD Marbella took a giant step to survival in 2B division by beating Baza 2 - 1 at the Estadio Municipal de Marbella. This win means that Marbella cannot be relegated automatically but they still need to avoid 16th place as that would mean they would have to play in a playoff match.

This all important game was again dedicated to the fans for their support this season and over 3000 came to watch what turned out to be a game full of emotion and entertainment for a match that neither team could afford to lose.

Marbella started strongly as expected and went close twice in the first ten minutes through Chus L√≥pez and Christian. Then in the 16th minute Christian made the breakthrough, Ib√≥n D√≠ez went past a Baza defender and put a great ball though to Christian who made no mistake hitting the ball across the goal and into the far corner of the net. The goal sent the crowd into raptures and even Tommy Mooney, who was at the match again, was seen punching the air in celebration. The game was unveiling in a similar manner to the previous match against Mazarron the only difference being that Baza actually came to play football and not get 11 players and the team bus behind the ball.

Just before the break Baza¬ís Jonathan went close with a long range shot and Paco Jurado was unlucky to see his shot hit the base of the post and go out.

The second half started in similar fashion to the first, Marbella looked confident and were looking the better side. A great run from Chus Lopez saw him upended in the Baza box and to everyone¬ís amazement the referee not only didn¬ít give the penalty but gave Chus, who had to go off for treatment, a yellow card.

Pepe Vergara came on in the 63rd minute to replace the ineffective Quini. This gave both the fans and players a lift. The change had an almost immediate result as Vergara was involved in the move that saw Marbella get their second goal of the match in the 68th minute. Strong pressure from the Marbella forward line forced Vojvoda and his keeper into a mix up, Jabuti took advantage and muscled his way between them to get his outstretched foot to the ball and rolled it into the net.

With 5 minutes left Baza got what turned out to be a consolation goal through Belencoso (one of the leagues top scorers). The final whistle saw jubilation both in the stands and on the pitch with players, fans and directors hugging each other, some in tears as UD Marbella achieved this important result in the dogfight for survival.

Marbella achieved what seemed impossible only a few weeks ago by pulling away from the drop zone and is now mathematically safe from automatic relegation. There is still the possibility of having to play in a playoff match to avoid relegation but lots of results next week would have to go against Marbella for this to happen, and just a point in the last match of the season away to Portuense on Sunday the 18th of May (18:00 hrs kick off) would mean that Marbella live to fight another season in Group 4 of the 2B division. 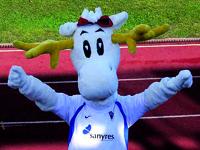